WATCH! Alan Gross, American Imprisoned in Cuba Released: ‘This Is the Best Hannukkah’

Alan Gross made a statement to the press after his release. Click play to watch.
Gross, 65, a contractor for USAID (United States Agency for International Development) was arrested in December 2009 while setting up Internet access for the island’s small Jewish community.
Cuba severely restricts Internet use for its citizens, and authorities accused Gross of smuggling illegal technology into the country to bypass local restrictions.

During the five years he was imprisoned, Gross watched Cuban baseball and read books and magazines sent by his wife. But his health deteriorated. He lost more than 100 pounds and most of the vision in his right eye. read the full story.t1215x1914awh 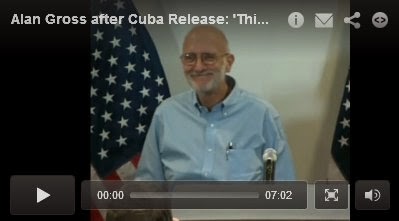