PROPHECY! Hand of God Appears in the Sky as Pastors Gather in Repentance? 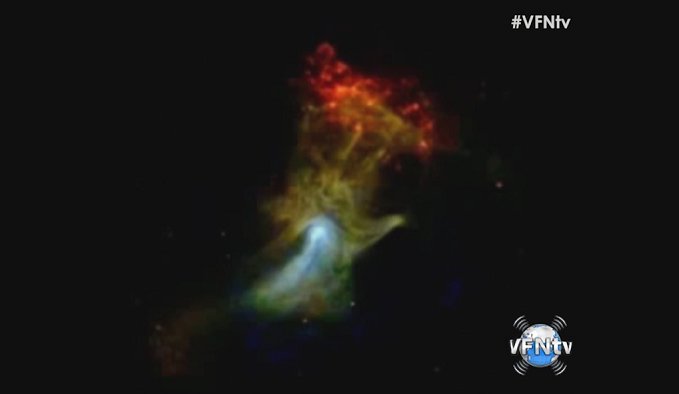 LISTEN OR WATCH NOW
Sometimes looking back brings an abundance of encouragement during very stressful times and seasons. Under the previous administration, God was revealing warning after warning of things that were on the horizon. As we have witnessed, God suddenly released mercy. As we have sought to continually share the accurate Word of God in all that we do, God had revealed to us His own thoughts of what had been shared in pulpits across America. God was upset with what was being spoken from the pulpits in America.
During one particular boardroom meeting, God led a prophetic man to prophesy that the Lord was angry with the Church in regard to what was being said. God showed one man a stack of podiums, stacked up like a pyramid. Suddenly the hand of God came and shoved it all violently to the ground. It wasn’t about the physical podium itself, but what was being said from behind the podiums.
Suddenly, a minister contacts Greg Lancaster and shares that he has a podium that he would like to give to him. This man begins to share his heart that he has been able to win more people to the Lord in his workplace than all the times he preached standing behind a podium. He wanted to get back to the simplicity of winning souls to the Lord. With the prophetic word of God’s take on these podiums fresh in Greg’s memory as straightforward and blunt as could be, he told this man, “If you give it to me, I’m going to burn it!” as as sign of repentance to God for what has been spoken behind the podiums in churches all over America.  The man was so excited to hear what Greg was going to do he said,  “THIS IS GOD! I FEEL GOD!” as God’s presence enveloped them both.
Only a few days later, leaders from around the nation gathered together and repented for the many religious words and false teachings that had been shared behind the pulpits across America. We asked the Lord to forgive us for what had been done and said to His Church. The Fear of the Lord was so tangible during this moment as the podium was turned to ashes as it was engulfed in flames. As the podium was burning, The Hand of God appeared in the sky. This is what was taking place in the heavenlies as prayers of repentance were being lifted up. God not only knows all things, but He is also everywhere at the same time.

See the full story of what took place in this encouraging moment, and so much more. Also shared in this segment: Tommy Tenney, Steve Hill, God Chasers, Spiritual Avalanche, false teachings, atheism, megachurches, ABC News, and humility. Greg and John shared in this segment.
screen capture from youtube.com/Sohel Reza

Related Content
‘Hand of God’ spotted by NASA space telescope
Hand Of God Spotted By NASA’s NuSTAR Space Telescope
iAbide.org
Emmaus Road Discipleship
VFN Kingdom Business
Subscribe to our YouTube Channel
Partner with VFNtv
Related Articles
Pray for our President of the U.S.A., President Donald Trump
Vine Seminar: Original Intent of the Church
The Foundations of Christianity and America
The State of the Family in America and how to Get Back to God’s Original Intent
It’s Not Wrong to Turn Back To God: U Turn Restoring America to the Strength of its Roots
The Structure of the Church is Family: Is it time to get back to it?
There is Something Special When the Church Comes Together as Family
Has Leaving God’s Order of Family Increased the Rate of Suicide?
Rethinking Church: We made it Up, George Barna
Re-Thinking Church – Institutionalized, Confined and Contented?
Rethinking Church- Not Us and Them, Just US
Re-Thinking Church: God is a God of order but his name is not Robert
Re-Thinking Church – Stats say it isn’t Working
Church is an Organism, not an Organization
Re-thinking Church
#VFNtv    PWDVOCT2016    PWDVUSOCT2016
God ChasersSteve Hill
0 FacebookTwitterPinterestEmail