Home 7 Mountains of CultureFaith Mountain Facebook Invites Francis Chan to Speak: Shares Why God led to him leave his 5,000 Mega Church for a Family Expression of the Church
Faith Mountain

Facebook Invites Francis Chan to Speak: Shares Why God led to him leave his 5,000 Mega Church for a Family Expression of the Church 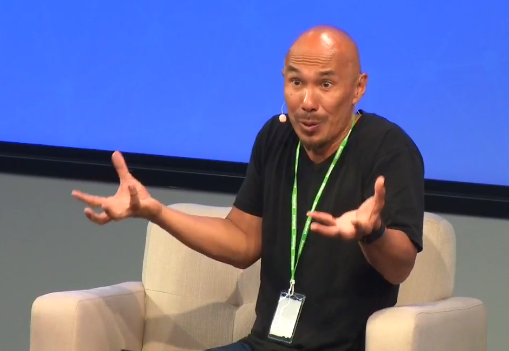 LISTEN NOW! (Or WATCH FULL PROGRAM!) Many around the world know about the social media giant Facebook which is headed by Mark Zuckerberg. But, some may not be aware that Facebook recently invited Francis Chan, author of Crazy Love, to speak to a group of its employees. Chan talked about the awesomeness of God and his journey in his life with the Lord. During the question and answering session, Chan shared that what he was doing in his life contradicted the Word of God and how he changed his actions to line up with the Word. This is such a powerful question for all of us to ask ourselves. “Is what God saying in His Word, happening in my life; in my ministry?”

Francis was asked “What is working well in your “We are Church” model that others can reproduce…?” Francis begins to share about how he started a church in his own home that eventually grew to gatherings of more than 5,000 people, to what many people would consider a Mega Church. But, things began to change when he looked at what the Bible says and what he was seeing. “I got frustrated at a point…Every single one of these people has a supernatural gift that is meant to be used for the Body [of Christ]”.  Simply put, this wasn’t what was taking place. As Chan explains, “5,000 people show up every week to hear my gift, see my gift. That’s a lot of waste. Then I started thinking, how much does it cost to run this thing? Millions of dollars!” Looking at how others gather in fellowship across the world reveals a large contradiction of what is taking place in America. This reality caused Chan to ask himself this question, “Gosh, how come people in other countries go to church for free?”

The waste of financial resources as well as the supernatural waste of gifts sitting idle while Chan exercises his gift was too much to bear. As Chan continued to compare what he was seeing in his ministry to what the Bible says, he saw another clear contradiction. “And then the Bible says, ‘oh I forgot, we’re supposed to love each other’”. Looking at what the Bible says demonstrates to the world that God loves them, he talks about what was really happening in his gatherings of 5,000 + people. “Our people don’t even like each other…I make them greet each other for 30 seconds. That’s the extent.”

The more Chan looks at what the Bible says and what he sees taking place in his gatherings, he is struck with this revealing question. “What would the Body [of Christ] look like if everyone was using their gifts?” This journey caused Chan to create the Read Scripture app which allows all of the people that he is discipling to read through the entire Bible in a year. Chan details how powerful this app is revolutionizing how the Church grows. “We’ve got guys coming off the streets, coming out of prison, to doctors, and people that work [at Facebook], or Google, and everyone is on these same reading plans; and everyone is in these homes.” The difference in cost versus his former 5,000 + gatherings are incomparable. Chan continues, “It costs nothing. We have 30 pastors now that all do it for free…so we have 14, 15 house churches and we just plan on multiplying that, doubling that every year. In 10 years, we could have 1.2 million people…and free!” What is additionally exciting is how these 30 pastors have matured and grown in their own journeys of how to take care of others coming to Christ. One of the pastors that Chan has raised up described the journey with these words, “It’s like being adopted rather than being at an orphanage.” Chan relates as he understands the difference of what he was previously doing, to what he is now doing. “Church the way I was doing it was like an orphanage. You know, here’s just a bunch of kids with one leader. And, rather than saying, ‘You know what, we’re going to put you in a home and these guys are actually going to really know you, and love you, and care for you.’”

As Francis clearly sees how his present gatherings are just like family, he recalls the moment when he realized he just couldn’t keep doing things the way he previously was. Chan was able to baptize a young man that was previously in a gang. Someone had seen the young man a time later and asked why he was no longer coming to the services on Sundays. “When I was baptized, I thought it was like being jumped into the gang, where it’s like ‘24/7 they’re my family’. I didn’t know it was just somewhere we attend on Sundays.” When Chan heard what the young man’s response was, he was cut to the heart. Chan couldn’t help but see how devastating this reality was to him. “Oh, that makes me sick. That makes me so sick, that the gangs are a better picture of family than the Church of Jesus Christ. I can’t live with that. I cannot live with that. We’re gonna do something different.”

Presently, the Church in America has been living like a flower pot. We are called to be a vine. When we being to walk out Church as God has called us to be, we’ll enjoy Church again. God has called us to be a family. His family. Be encouraged as you hear the full statements from Francis Chan during his time at Facebook, how you can learn more about what Francis is talking about, the importance of a Vine Seminar, and so much more. Also shared in this segment: traditional church, original intent of the Church, Francis Chan, Facebook, Crazy Love, San Francisco, family, God’s design of family, relationship, Vine Seminar, and love. Greg and John shared in this segment.
screen capture from facebook.com/crazyloveministries

Related Content
Francis Chan
Crazy Love: Overwhelmed by a Relentless God
Francis Chan LIVE from Facebook
wearechurch
Read Scripture App
Ants, Vines, And Churches by Charles Simpson
iAbide.org
Emmaus Road Discipleship
VFN Kingdom Business
Subscribe to our YouTube Channel
Follow us on Twitter
Partner with VFNtv
The Vine and the Branches
John 15:1-17
Related Articles
5% of the World’s Population and 25% of the Worlds Incarceration Population: AMERICA! ; 100 Top Christian Leaders sign Justice Declaration seeking to bring a restorative process the Criminal Justice System
“The Anointing is on You for Your Assignment!” says Lance Wallnau Advancing the Kingdom of God by Conquering the 7 Mountains of Culture!
What Can the Church Learn from Super Chickens?
Has Leaving God’s Order of Family Increased the Rate of Suicide?
Only 4% of Millennials Have a Biblical World View?
The Structure of the Church is Family: Is it time to get back to it?
“Our Nation Needs Something Besides Religion” Two of God’s Generals: Peter Wagner & Steve Hill share Precious Wisdom
Has Much of the Church Become Institutionalized? The Price of Freedom! Jesus Came So That We Could Be Set Free!
There is Something Special When the Church Comes Together as Family
#VFNtv   F1A2I3T4H5    H1O2P3E4   L1O2V3E4   S1P2I3R4I5T6    M1O2U3N4T5   R1E2L3I4G5I6O7N8     C1H2U3R4C5H6