9/11 Moment of Silence, President Trump and First Lady Melania Trump, When No Amount of Words are Enough 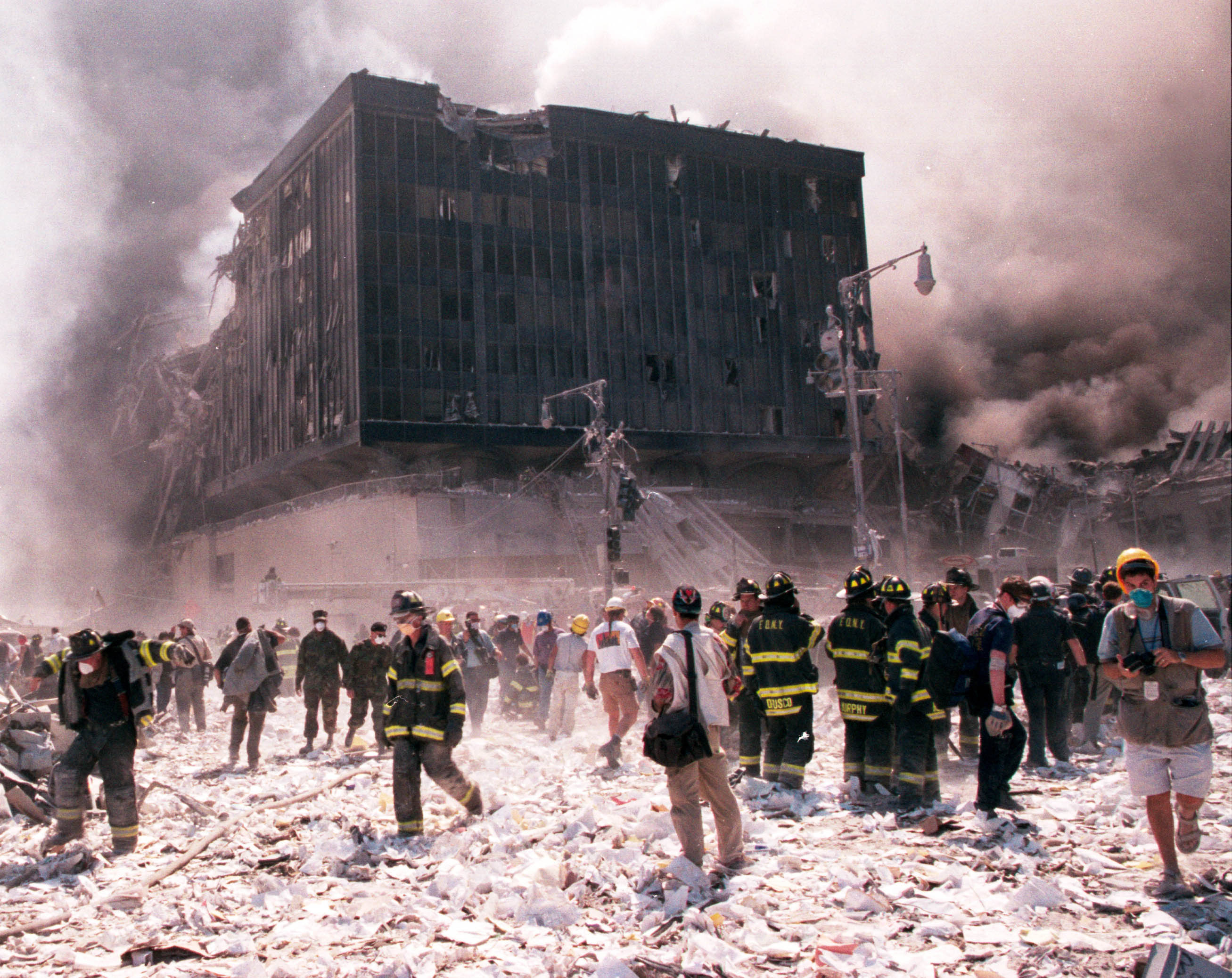 LISTEN NOW! (Or WATCH FULL PROGRAM!)  16 Years ago, America suffered indescribable travesty on 9/11/2011, when America was attacked by terrorists. So many lives were saved because of the many unknown heroes who were willing to lay down their lives. Yet, on this unforgettable day, nearly 3,000 people were killed. As the nation pauses to remember, so does our President and First Lady. President Trump and the First Lady took time to lead a moment of silence in remembrance of those lost on 9/11. It is a deep heartfelt reminder of the loss that our nation suffered on this fateful day.

Many can remember the very place where they were standing or sitting the moment they heard or saw the planes hitting the Twin Towers in New York City. The President also joined many who convened at the Pentagon to remember the devastation that took place on 9/11. As one who was in New York City on this day, President Donald Trump shares how that day began. “We’re gathered here today to remember a morning that started very much like this one. Parents dropped off their children at school. Travelers stood in line at airports and getting ready to board flights. Here at the Pentagon and at offices all across the country, people began their early meetings. Then, our whole world changed. America was under attack. The realities that took place that morning is unforgettable. “The horror and anguish of that dark day were seared into our national memory forever. It was the worst attack on our country since Pearl Harbor and even worse because this was an attack on civilians — innocent men, women, and children whose lives were taken so needlessly.”

As we remember the nearly 3,000 people that lost their lives, we must also remember the many mothers, fathers, brothers, sisters, and friends who continue to live their lives with irreplaceable holes in their lives from lost loved ones. The President continues to share how the heart of the nation is with those who lost those that were so near and dear to them. “Today, our entire nation grieves with you and with every family of those 2,977 innocent souls who were murdered by terrorists 16 years ago.” As the President shared his heart-felt words, he was joined by the families who lost family members on that tragic day. “Though we can never erase your pain, or bring back those you lost, we can honor their sacrifice by pledging our resolve to do whatever we must to keep our people safe.”


As the President continues his words from the grounds of the Pentagon, he shares about the many lives that were lost at the Pentagon during the morning of September 11th. “That September morning, each of those brave Americans died as they had lived: as heroes doing their duty and protecting us and our country. We mourn them, we honor them, and we pledge to never, ever forget them.” The President continues to entail how the heart of the nation was so devastatingly torn that morning. “The living, breathing soul of America wept with grief for every life taken on that day. We shed our tears in their memory, pledged our devotion in their honor, and turned our sorrow into an unstoppable resolve to achieve justice in their name.” While enemies of our nation had their intentions, President Trump commented on the resiliency of Americans in the face of their enemies. “But America cannot be intimidated, and those who try will soon join the long list of vanquished enemies who dared to test our mettle.”

While there were many service men and women who were lost because of 9/11, there have been thousands that responded to the call to fight against terrorism. “Since 9/11, nearly 7,000 servicemembers have given their lives fighting terrorists around the globe. Some of them rest just beyond this fence, in the shrine to our nation’s heroes, on the grounds of Arlington National Cemetery. They came from all backgrounds, all races, all faiths, but they were all there to dedicate their lives, and they defend our one great American flag.” As the President honors the many men and women in our military, he also points specifically to one man that exuded tremendous bravery on the morning of 9/11: Isaac Ho’opi’i. “He was a mile away when he got the call over his radio that a plane had crashed into the Pentagon. He sped to the scene and raced into smoke and fire. Few people would have done it.” The thoughts that raced through Isaac’s mind are unimaginable. Yet, what he saw didn’t stop him. “He ducked under live electrical wires and trudged through puddles of jet fuel only steps away from sparks and from vicious flame. In the pitch black, he began calling out people in need of help.” As the President details Isaac’s decision to repeatedly enter the rubble in the side of the Pentagon, he shares how Isaac rescued 20 people over a period of 36 hours. What is additionally encouraging is that he joined the President in this moment of remembrance. “And today, Isaac continues to do exactly that. Isaac still works at the Pentagon, now as a sergeant. He’s on duty right now, and he’s joined us here today for the ceremony.”

Remembering those that we have lost in our lives is a painful memory. It can be additionally agonizing to re-visit the actual location where their lives were lost. The President expresses his compassion as he comments on this reality. “To the family members with us today, I know that it’s with a pained and heavy heart that you come back to this place. But by doing so, by choosing to persevere through the grief, the sorrow, you honor your heroes, you renew our courage, and you strengthen all of us. You really do. You strengthen all of us.” As the President concluded his remarks on 9/11, he also took part in a wreath laying ceremony.

We also stand with the President as our hearts and prayers go out to the many families and individuals who lost loved ones on the tragic morning of September 11, 2001. Join us in prayer that God would give wisdom to President Donald Trump, and that God would hear our cry for protection over our nation. See the entire speech from the President regarding 9/11, his moment of silence with First Lady Melania Trump, and so much more. Also shared in this segment: The Trump Administration, President Donald Trump, First Lady Melania Trump, The World Trade Center, New York City, September 11 attacks, hijacked aircraft, American Airlines Flight 11, United Airlines Flight 175, American Airlines Flight 77, United Airlines Flight 93, National September 11 Memorial & Museum, Pentagon Memorial, Flight 93 National Memorial, repentance, and prayer. Greg and John shared in this segment.
Courtesy of Anthony Correia/Shutterstock.com