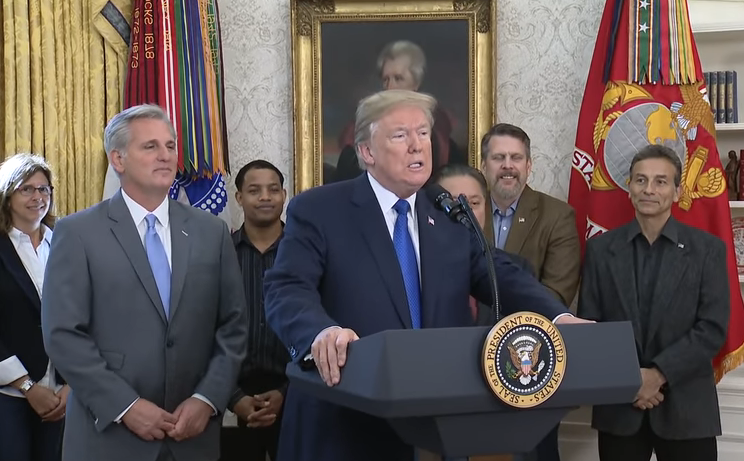 LISTEN NOW! (Or WATCH FULL PROGRAM) As President Trump continues to maintain his faithful leadership at the helm of America, the positive reports continue to be released. With business leaders in attendance, President Trump shares an exciting jobs announcement regarding how the American economy is continuing to improve. Since the President has taken office, the Stock Market has reached “new all-time highs” OVER 60 TIMES! But that’s not all. President Trump has also brought great improvements to the unemployment in our nation as “unemployment is as its lowest in almost 17 years”.

As the present business world is not simply national, but international, President Trump underscores the importance of not only creating jobs in America, but by bringing jobs BACK to America. “Jobs have been offshored to so many countries that were now coming back, and now those jobs and those companies are coming back to our great American home.” New jobs are being created because business leaders cannot ignore the tax incentives of doing business in America because of the President’s hard push for tax reform. These are not just words on a page, or statements before a microphone. Representatives from major corporations agree as the President shares astonishing changes.

“We’re thrilled to welcome Broadcom Limited and its CEO, Hock Tan, to the White House to announce that Broadcom Limited is moving its headquarters from Singapore back to the United States.” Broadcom employs over 7,500 employees throughout America. This move will greatly impact America’s revenue. ”With this commitment, more than $20 billion in annual revenue will come back to our cities, towns, and the American workers.” As jobs are flowing back into the American economy, the President understand that additional changes must be made: Corporate Regulations. “That’s why I’ve already slashed more unnecessary job-killing regulations than any President in history.” No longer will growing corporations feel the tightening hindrances of regulations.

If these announcements were not exciting enough for the American worker and business leaders, there were also uplifting reports to be shared about how business taxes will be changing. “We will restore our competitive edge by reducing business taxes for the first time in more than 30 years…” As the President points out, these changes will boost America’s economy with trillions of dollars.

The President also shares the moment by allowing the CEO of Broadcom, Hock Tan, to share his perspective on their decision to move their headquarters from Singapore to the United States. Throughout the many words of encouragement and hope that Mr. Tan shares, his statement can be summed up in these powerful words; “we are announcing that we are making America home again”.

These are moments that we cannot understate. These are moments of celebration. The tides are turning, and the restoration of America’s economy is beginning. See the full report from President Trump on America’s present business assessment as well as the statements from Mr. Tan, and so much more. Also shared in this segment: The White House, President Trump, President Donald Trump, unemployment, jobs report, are businesses coming back to America?, business mix, tax codes, how are businesses being effected?, Foxconn, Broadcom, and hope. John and Steve shared in this segment.
screen capture from youtube.com/The White House