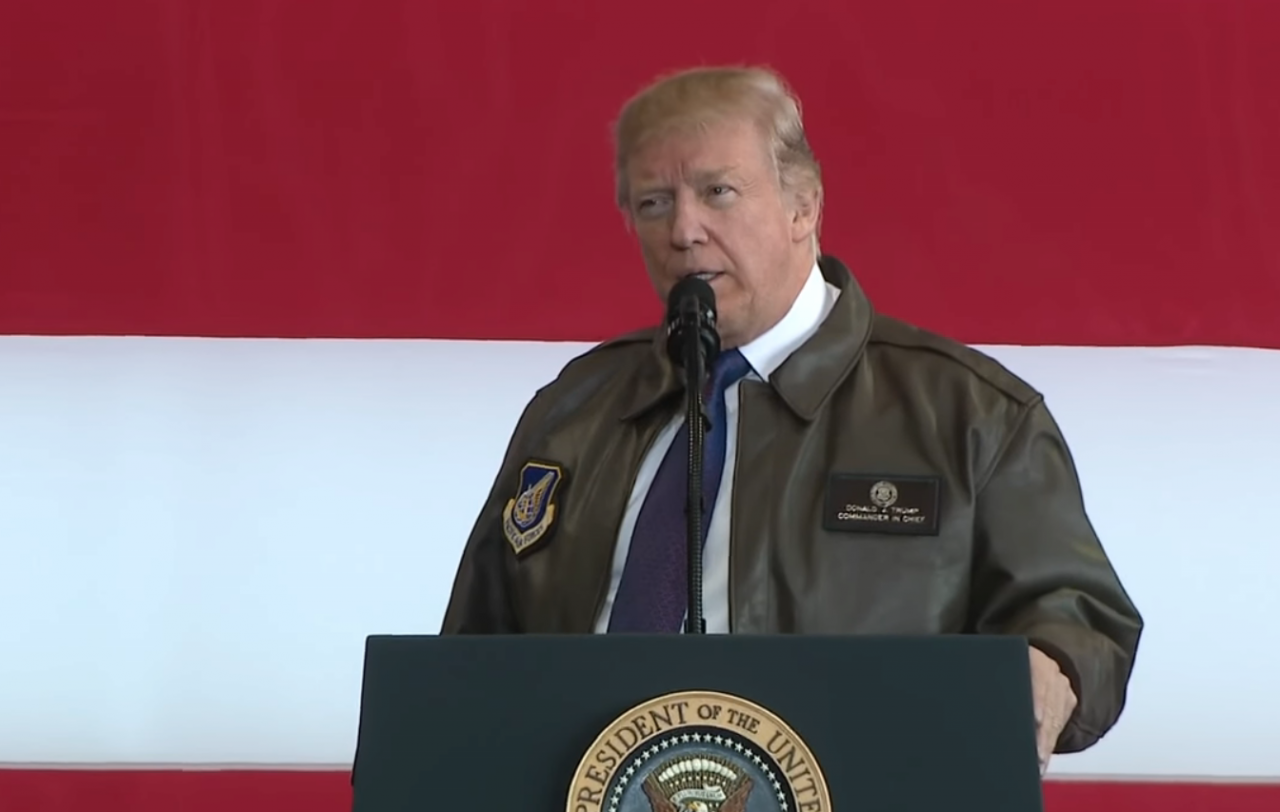 LISTEN NOW! (Or WATCH FULL PROGRAM!) As the President continues his 5 country Asian tour, he also visits some of the American troops that are stationed at the Yokota Air Force Base in Japan. Before the President is even able to begin his uplifting words, he is offered a leather bomber jacket by Colonel Bull Moss. When the President asks the troops, “should I put it on?”, the crowd immediately erupts with roars of cheers. The President wastes no time expressing his deep gratitude and thanks to Ambassador Bill Hagerty and the Japanese people.

As the President speaks, he addresses the awareness of the long line of history of military men and women that have paved the way for freedom. “Each of you inherits the proud legacy of generations of warriors that have walked these very grounds for more than seven decades. From Yokota’s runways, American pilots took to the air and drove back the invaders during the Korean War. Tremendous courage. Tremendous bravery.” Our nation’s military also played a strategic role during the tsunami that Japan suffered in 2011. “And in the launching point for Operation Tomodachi — the largest humanitarian relief effort in American history, which saved the lives of thousands and thousands of great Japanese citizens.”

Additionally, the President understands that the call to serve is not laid only upon the shoulders of the men and women who don the military uniform, but also their families and spouses who faithfully serve alongside of them. “I also want to express our gratitude to the family members and loved ones who sacrifice so much to make your service possible. They are absolutely incredible people, and it’s not easy. America is profoundly grateful for all you do.” It is so deeply assuring and uplifting to hear our President speak so highly of our troops and their families. The President speaks hope to each of these service members as he points to the many achievements that have been taking place back home in the United States; from the many record breaking achievements of the Stock Market, to the repeated blows against ISIS.

As the President continues, he touches on the remarkable relationship between Japan and the United States and the sobering reminder that only a few short decades ago, these two countries were at war with one another. “Our alliance is a testament to the transformative power of freedom. Today, nations that once waged war now stand together as friends and partners in pursuit of a much better world.” It is because of the faithfulness of these service members that America is continually able to show how we stand militarily in defense for Japan, as well as standing alongside Japan as an ally.

Some may not be aware, but the Yokota Air Base serves as an integral strategic base in this region of the world. As the President points out, “Today, this base serves as a critical center for coordination for American and Japanese commanders to plan their missions. For almost 60 years, the military alliance we see on this base has endured — a cornerstone of sovereignty, security, and prosperity for our nations, this region, and indeed the entire world.” As Yokota Air Base stands, and the many men and women of our armed services stand ready at their post, the President is dedicated to making sure that each of them are outfitted with the finest equipment in order to carry out their roles and responsibilities.

So many of us don’t know the true cost of what is required and willing to be paid in order to provide freedom for our country. Travis Mills is a man that fully understands that cost. “My job was the military. I loved it, ya know. Working with soldiers every day, doing my job, was like the greatest for me.” During one particular morning, on patrol, his life was about to be changed, never to be the same. While serving in the United States Army, he suffered injuries that took both arms and both legs. He is one of five individuals that has survived quadruple amputee injuries. When some would be terrified to face life in this reality, Mills never stopped. “Every day is a challenge, but its not a challenge you can’t overcome.”

We are deeply grateful for Travis Mills and all of them men and women of our nation’s military who are willing to pay the ultimate cost each and every time they make the decision to leave friendly lines and fight for the freedom afforded in America. See the full speech from President Trump during his visit to the Yokota Air Base, the trailer to the documentary about Travis Mills, the President sharing the backstory of Japan’s Prime Minister Shinzō Abe being the first to congratulate the President on winning the Presidential election, and so much more. Also shared in this segment: The Trump Administration, President Donald Trump, Veteran’s Day, Remembering America’s Veterans, United States Army, US Ambassador to Japan Bill Hagerty, and hope. John and Steve shared in this segment.
screen capture from youtube.com/The White House