Home 7 Mountains of CultureGovernment Mountain WATCH! Anniversaries in Israel; Significance of President Trump and 70; 10 Months of Swamp Wars are Over!
Government MountainHoly SpiritHopeIsraelProphecyProphecy for AmericaProphecy for the WorldProphetic Words from Oct 2016 to TodayVFNtv ProgramsWATCH FULL PROGRAM

WATCH! Anniversaries in Israel; Significance of President Trump and 70; 10 Months of Swamp Wars are Over! 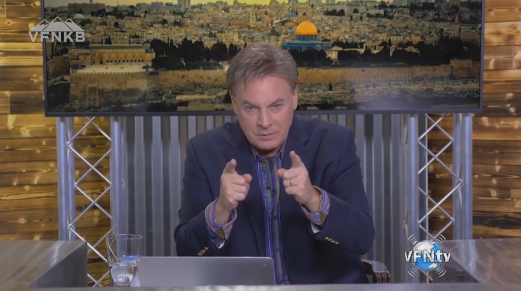 LISTEN NOW!
GOD’S PROPHETIC TIME CLOCK: ISRAEL
No matter who we are, or where we are, it is important that we keep a keen, watchful eye upon Israel. Israel is the apple of God’s eye. It matters what our perspective of Israel is, and especially how we respond to Israel. Lance Wallnau recently spoke on the strategic relationship between America and Israel, and the importance of this relationship in this hour.
Not only has it been 70 years since Israel’s birth, but it has also been 50 years since Jerusalem was also established. Wallnau was the first to prophetically state that Donald Trump would be the 45th President. Taking this into consideration, it is notable to recognize the President’s decision to move America’s Embassy in Israel from Tel Aviv to Jerusalem. Just as Wallnau prophetically stated that Trump was carrying the Cyrus anointing, he describes the parallels between the leadership of Cyrus and President Trump.

“In the first year of Cyrus’ reign, what did he do? He made a decree. And that decree had to do with Jerusalem. And, isn’t it amazing that in the very first year of ‘Cyrus Trump’, a decree was made regarding the embassy of the United States being moved to Jerusalem.”

It matters that we pay attention to these monumental events that are happening. As Wallnau explains, these are signs from the Lord. “You think these things are accidents? They’re almost like sign posts that God is giving us on a calendar; on a Gentile calendar.” So, the question then is, why would God give us these signs? “2018 is a pivotal year for God’s dealings with America, the Gentile nations, and His hand in Israel”.
This is so encouraging. God has a plan for the nations of the world and this hour. It is such an exciting time to be upon the Earth. If you bless Israel, you are going to be blessed. This is not a man thing. This is a God thing. What are your thoughts towards Israel? We want to hear from you. See the full conversation about the importance of how we perceive Israel, the prophetic perspective from Lance Wallnau, Hebrew Year 5778, 500th Anniversary of the Reformation, Jerusalem, Harry Truman, US Embassy in Jerusalem, President Donald Trump, The White House, The Trump Administration, and hope. Greg and John shared in this segment.

FIND OUT HOW “70”, President Trump & Israel Relate-Pastor John Kilpatrick
Did you know that you are a part of a divine hour of God’s Creation? Oftentimes, events can be happening in our lives, in our nation, and throughout the world, and we aren’t even aware of their significance. Pastor John Kilpatrick recently shared a Charisa News article that revealed the divine intersection of this hour and the Presidency of Donald Trump.
As Charisma News reports, the birthdays of Donald Trump and the nation of Israel reveal a shocking connection. “Donald Trump was born exactly 700 days before Israel became a nation.” The connections get even more precise. Pastor Kilpatrick explains, “Israel was 77 days old exactly 777 days after Donald Trump was born. Israel’s 70th birthday will come exactly 700 days after Trump’s 70th birthday.”
Did you know that President’s Trump first day in office is also connected to this continual series of 7’s? “Donald Trump will be 70 years, 7 months, and 7 days old on his first full day in the White House.” All of this took place during the year of 5777 on the Hebrew calendar.
Prophecy is history in advance. You’re looking at prophetic declarations of what God is doing, and they are coming to pass. There are also intricate intersections connected to Vice President Mike Pence. Did you know that God was this intricately involved in the details of our lives? What are your thoughts. See the full words from Pastor John Kilpatrick, and so much more. Also shared in this segment: Church of His Presence, Pastor John Kilpatrick, Israel, President Donald Trump, Vice President Mike Pence, The White House, Jerusalem, Israel, and Prime Minister Benjamin Netanyahu. Greg and John shared in this segment.
See more, related content and articles for this article.
THE SWAMP WARS ARE OVER; New Season of Breakthrough is Now; Cindy Jacobs and Dutch Sheets
The fact that we are wrapping up the final days of February in 2018 brings much to celebrate. According to Cindy Jacobs, these are the final days of the “Swamp Wars”, and the beginning of 3 years of peace. When speaking to Jim Bakker, Jacobs shared a prophetic vision that the Lord revealed to her. In this vision, she saw a swamp draining, and revealing swamp creatures all throughout. It is the interpretation of this vision that should get our attention.
Chuck Pierce interpreted what Jacobs had been shown. “There is going to be 10 months of turmoil, and then there will be 3 years of peace.” This season was dependent upon how the Church prayed. Many shakings and headlines have erupted regarding our national government. It seemed as if many were struggling and jockeying for position as our new administration began.
Jacobs also shared that Holy Spirit spoke to her. “There are many moles in the various agencies…I want you to pray that every mole is exposed.”  Jacobs re-emphasizes the days that are drawing to a close. ” It’s going to be the swamp wars. It’s swamp wars. And it’s gonna continue till next February. But it’s gonna take that long to drain the swamp enough that these wars are over.”
The Church has obviously prayed because this is what we have seen and witnessed taking place. Over $7 Trillion has been added to our economy. The unemployment rate within African Americans and Latin Americans is at its lowest rate since unemployment has been recorded. In addition, the U.S. Embassy in Israel is currently being moved to Jerusalem. This is so powerful. When God shows us these realities, we must decree and declare words that line up in agreement with God’s plans and purposes. Dutch Sheets demonstrates how we are supposed to do this when he recently said, “the prophet said ‘breakthrough is coming in 10 months, February of 2018, that will result in 3 years of turn around. And, we’re gonna steward this prayer movement, and this turnaround through 2020…”
When God spoke to Ezekiel in the valley of dry bones, He told him to speak to the bones. We must declare truth and believe the truth of the words that God gives to us. We must stop watching dark media and walk in alignment, in this season that God has placed us. God has given us His authority to speak out the Kingdom throughout the Earth. Be encouraged and stirred as you hear the full report of this divine season, and so much more. Also shared in this segment: Holy Spirit, prophetic word, prophecy, Cindy Jacobs, Chuck Pierce, Jim Bakker Show, Dutch Sheets, proclamation, decree, hope, Planned Parenthood, Cecile Richards, Revival, President Donald Trump, and moles. Greg and John shared in this segment.