WATCH! No Wallflower or Talking Head; NO Israel Bashing Or Bullying On My Watch, Nikki Haley, U.S. UN Ambassador AIPAC 2018; 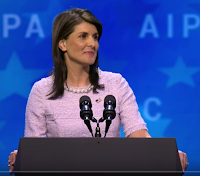 No Wallflower or Talking Head-Nikki Haley, U.S. UN Ambassador AIPAC
U.S. UN Ambassador Nikki Haley is referred to as Haley’s Comet for her staunch support of the United States and Israel at the United Nations. When she was offered the job as U.S. UN Ambassador, she said she would not be a wallflower or talking head, that she would say what she wanted, and President Trump responded that that is why he wanted her for the job. She says she will always be respectful, but she will never shut up! She believes it is necessary to know what every country needs but the most important thing is not to be afraid to stick with the fundamental principles even if they go against entrenched customs. She knows that standing up for your friends is critical. She does not like bullying and points out that Israel does not get bullied especially on the battlefield. At the United Nations, Israel is getting bullied, but the US UN Ambassador says that does not sit well with her. Israel has been a blessing to the world! We want to hear from you! Have you experienced bullying? We need to start caring for people before something happens, like these tragic events we have seen in the U.S. due to people being bullied. We should stand up for people like U.S. UN Ambassador Nikki Haley is standing up for America and Israel! Also share in this segment, Prime Minister Benjamin Netanyahu, Iran, Syria. Greg and John shared in this segment.
See more, related content and articles for this article.

NO Israel Bashing or Bullying on My Watch-Nikki Haley, U.S. UN Ambassador AIPAC 2018

U.S. UN Ambassador Nikki Haley shares at AIPAC 2018. One of the United Nations agencies with the worst track record of Israel bias is UNESCO. UNESCO recently declared one of Judaism’s holiest sites, the Tomb of the Patriarchs, as a Palestinian heritage site in need of protection from Israel. That was enough. Ten months into this administration, the United States withdrew from UNESCO. She goes on to say that Israel has nothing to do with the problems in the Middle East and now due to the influence of America supporting Israel more countries have followed and stopped bullying Israel. The Ambassador declares that Jerusalem, was, is and will always be the capital of Israel! This is not something that was created by an American decision, what President Trump did was recognize a reality that American Presidents had denied for too long. President Trump dared to recognize that fact when others would not. She looks forward to the day of opening the new U.S. Embassy in Jerusalem. Next, she responds to comments that were made about America showing favoritism and her thoughts are that there is nothing wrong with showing favoritism toward an ally like Israel. The U.S. will continue to demand that Israel is treated like other countries, and we will not accept Israel being treated differently than other countries any longer. Continuing she says that she and President Trump are pushing to draw a closer connection between U.S. foreign aid and how countries vote at the U.N.; U.N. votes should never be the only factor in foreign aid decisions. Many interests go beyond the U.N., but they should be one of the factors, and they are determined to start making that connection.

It is so encouraging to hear from Nikki Haley and how she unashamedly supports Israel and America! We need to be supportive of the people supporting Israel and America. It is good news as we see God’s hand move across the nations. We would love to hear what you think about this. Also shared in this segment, Iran, Syria, Britain, France, Ukraine, Russia. Greg and John shared in this segment.
screenshot from youtube
See more, related content and articles for this article.