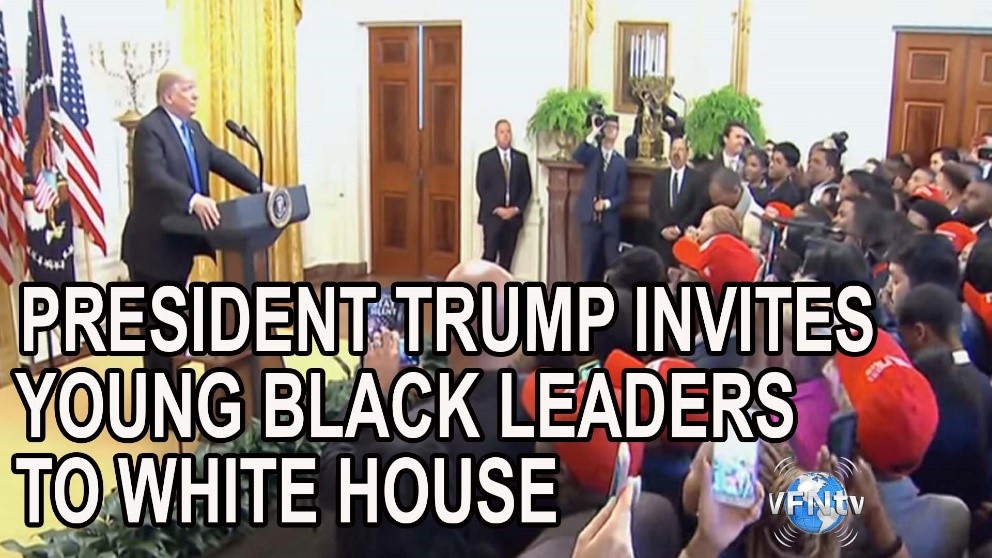 When God tells us something prophetically, we will usually be talking about it when it isn’t popular, mostly because people believe the prophecy will never happen. We know that God speaks prophetically to His people. Greg shares how God showed him that the White House was filled with all Americans not just the “elites.” The White House is known as the People’s House and with the Trump administration now in office, we see that it is now the People’s House again.

President Trump speaks to the group. “It is my great honor to be with so many brilliant…brilliant, courageous, patriotic, and proud Americans.” He asks who in the room wants to be the President some day and many yelled in agreement. President Trump won only 8% of African American votes in 2016. He continues, “I asked black Americans to give me a chance with your vote…the African-American unemployment rate has hit the lowest level ever recorded in the history of our country. History is fashioned by those like you who step up to the plate and get into the game and get the grand slam home run.” The room chants, “USA! USA! USA!”

It is great to see that African Americans are not going to miss out on the blessing! God also revealed prophetically to Brianna Bolender in a dream the impact that President Trump would have on the African American community. In this dream, she was walking with President Trump, one of his advisors, and a young African American man, in what appeared to be a large store, like a Sam’s Club. “As we’re going through the aisles, each aisle was an issue. Like taxes and poverty.” She continues to share how, what appeared to be a national poll on past presidents, was at the end of one aisle. “They had done this nationwide poll of something to the effect of ‘what administration did you [the African American Community] feel the most represented or edified.’” As she describes how she saw the results of the poll, she could see the name of Obama overwhelmingly circled. She continues, “you could tell that this poll had been done before because [Bill] Clinton’s name was there and those who had selected  Clinton before scratched that out and circled Obama.” It was then that the young, energetic African American man who had been walking and talking the entire time said this revealing statement. “You see, they felt they were edified or represented by this Administration. But, the truth is, they lost their identity in that Administration.” God is responding to the injustice that has been happening in America.

It is powerful to see God speak through prophecy to let us know what will happen. Reportedly since the Young Black Leaders visited the White House, there has never been that many African America citizens there at one time! It is time for this to happen, all the citizens are coming into the White House! It is important to keep our country moving in this great direction and to do that we must all get out and vote! You can find out information about the candidates running in your state here and find out what they stand for, so you can be a value-based voter. We want to hear from you, you can write to us at Friends@VFNKB.com. Greg and John shared in this segment.

Dr. Michael Brown recently wrote a book, Donald Trump is Not My Savior, and he has an honest conversation with Christians and how they can relate to President Trump. James Robison, the founder of The Stream, speaks with Dr. Brown about the book and it is a great interview to hear why he wrote this book. Many Christians have been worried that President Trump may not be saved and that they shouldn’t support him, but Pastor John Kilpatrick said it perfectly. “President Trump might not be a man of God, but without a doubt, he is God’s Man.”

James starts the interview introducing the book. He shares how the name of the book, Donald Trump is Not My Savior, is not a sarcastic comment, it is the truth. “There is no president, no king, no leader who will ever be our savior. Jesus is King of Kings and Lord of Lords. He is our Savior. He is the greatest example the world will ever see, and everything that flowed from His mouth was wisdom.” He shares how Dr. Brown is making a point with the book and is not taking a shot at President Trump.

James shares how Dr. Ben Carson suggested to President Trump to be open to speaking to James, and he has been open to hearing the truth from him! He shares how he has spent much time with President Trump speaking into his life and being honest with him. James asks Dr. Brown a question, “You began writing cautions and concerns and calls for prayer. Now, do you see at this point because if you go through this (the book) it almost looks like you went from being one who might have been evaluating from a critical point of view to evaluating from a positive? What’s going on? Are you seeing what looks to you like in some ways a miracle and maybe even a miracle and answer to prayer?”

Dr. Brown answers, “There is no question that the people surrounding Donald Trump and the people praying for him have made a difference. That’s why the subtitle of the book is, An Evangelical Leader Speaks His Mind About the Man He Supports as President…I feel like we get boxed in. Either we make him our savior, and everything is perfect, or we have to completely renounce him, we have nothing to do with him…why can’t we say what Melania did? That’s his wife, that’s the closest person to him in the world. She says I don’t like all of his tweets. Why can’t we say, I wish he didn’t call that former employee a dog, but you better believe I support him, and he is doing a great job here…there is a lot of positive stuff. Who else has met with the leader of North Korea and who else has gotten Europe to make certain changes who else has actually not just talked about moving the Embassy to Jerusalem but moved it.”

Dr. Brown shares how he is a Messianic Jew, and he was visiting Israel this year, and he was being yelled at to stop preaching in the streets. He wanted to take the opportunity to speak about Jesus, and he asked those standing around him, didn’t he have the right to say what he wanted to say? So, one man asked him if he liked Trump and then he said he voted for him, so the man said you are good and told the people gathered to listen to him. “What’s interesting as much as we wish this could be more Christian; let’s see evidence of God working in his life. You are looking at a ripple effect around the world, that’s massive, and that’s incredible. So, God is definitely at work…so I reduced it to something really simple. Donald Trump didn’t die for my sins Jesus did. Jesus gets my life, my loyalty, my testimony is tied in with Him. President Trump is my president, he gets my vote, and I’m not going to let the world force it to be either or. And we need to tell others, my testimony is tied in with Jesus and my reputation is tied in with Jesus.”

We are all imperfect, and it is very important that we pray for the coming elections and that we get out and vote! You can find out what values the candidates that are running stand for here and you can be a value-based voter! We want to hear from you and what you think about this conversation. You can write to us at Friends@VFNKB.com. Greg and John shared in this segment.