Home GLM “I knew Peace, but NOT the Prince of Peace!” The Jesus Revolution Part 12
GLMThe Greg Lancaster Show

“I knew Peace, but NOT the Prince of Peace!” The Jesus Revolution Part 12 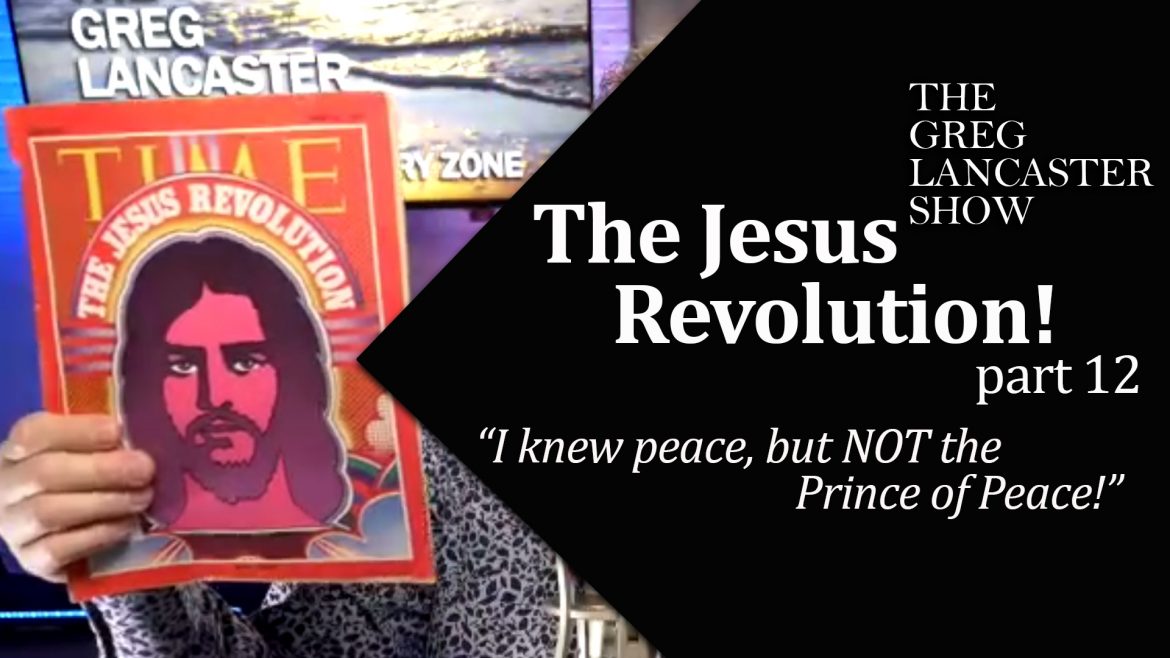 The Lord has prophetically revealed that “It’s going to be the 1970’s again”. This was the decade when God mightily poured out His Spirit in America, that is known today as The Jesus Movement! People were coming to Christ in the crowds hundreds at a time. One would think that people were highly educated and experienced in religion before this moment took an entire nation by surprise. But, this was hardly the case. One man shared from his own story that he was a surfer at the beach one day, but the next he felt the calling of the Lord upon him to share the Gospel. “It just sort of came supernaturally, but just naturally developed. Next thing you know, you got people around you. They’re asking you Bible questions, you’re opening your Bible, you’re teaching them and the crowd keeps growing. Low and behold, suddenly you have a Church.” This is such a freeing and empowering perspective to have and be reminded of that we don’t need a theological education to be hungry for the Lord and willing for Him to move through our lives. When Jesus decided to choose His disciples, He didn’t go to the Jewish temples looking for men studying prophecy. He went and chose simple fisherman. God is totally okay with us having the understanding that we have nothing to bring to Him and that we are completely dependent upon Him. Where we get into trouble is when we see the Lord begin to do great and mighty things in our lives,  but then begin to rest on those experiences, and not the Lord Himself who is the One that is carrying out those experiences through our lives.

In the 1970’s, so many people were hungry for the Lord. They were searching, they just didn’t know it. The world presented the answer as a counterfeit solution through sex, drugs, and relationships. Even after all the searching, people still weren’t satisfied until they encountered the One who is Love. As David Rosales, Pastor of Cavalry Chapel Chino Valley shares what he learned in the hippie movement, “it taught me things like community, and sharing, and love, and the value of peace. It was all a sham. It was all pretend. None of it was real.” He continues, “it was a close counterfeit in many ways. But, there’s no holiness. There’s no genuine love for one another.” So many people are looking for that genuine encounter of love and authentic relationships. They may be looking for that in a sports team, or in a military unit, but outside of Jesus, it falls short.

There was a lot of craziness that was going on in the 1970’s, and we can be encouraged by that because the Lord moved mightily in spite of  the tragic happenings taking place in the 1970’s. God was responding to a people who were desperate and crying out for Him. There is a similar shaking that is taking place in America today. There are similar crises happening in the headlines across our nation. You can’t say that God can’t turn these events around. What is God looking for? He is listening for that desperate cry of His people. That bitter cry of humility and brokenness from a people who understand that their only hope is in the Heavenly Father who is above all things in this Earth. We can stop the darkness that is sweeping across the land, if we will cry out to Him. This is the very essence of 2 Chronicles 7:13-15, “When I shut up the heavens so that there is no rain, or command locusts to devour the land or send a plague among my people, if my people, who are called by my name, will humble themselves and pray and seek my face and turn from their wicked ways, then I will hear from heaven, and I will forgive their sin and will heal their land. Now my eyes will be open and my ears attentive to the prayers offered in this place.” God is not addressing the world in this passage. He is speaking to the Church, those who are His people. We must separate ourselves from those close relationships with sin. Those “sin friends” in our lives. Not people. Sin. What is separating us from God Himself? That is what we must distance ourselves from. God is not waiting for us to grumble and complain. This is what the Israelites did in the desert. Their reward was a longer journey. God is wanting for us to cry out to Him. It will only get darker and darker until we cry out to Him.