MEMBER LOGIN
Home » The Bible “Why Do You Believe the Bible?”
GLM

This is one of the most important questions and answer we could ask and answer. 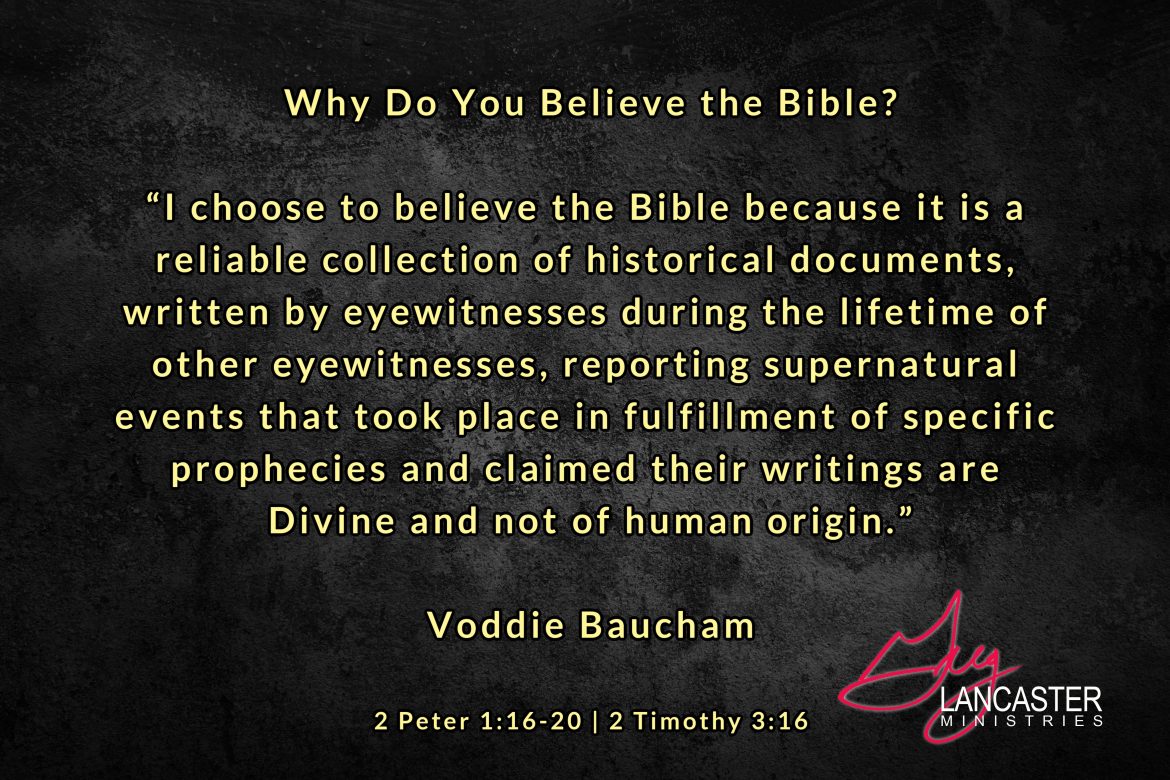 Since God is the Creator of the Universe, the earth, sky, and sea, and all that is in them, and He gave us a divine book, written under the inspiration of His Spirit to make Himself and His creation known to us, not believing in the Bible turns a person, a marriage, a family, a nation and a world into confusion and chaos.

Results from the most recent Barna Group Survey of adults 18 years of age and older:
“30% of Americans are what they call “Don’ts,” ‘Don’t Know, Don’t Believe, Don’t Care that God exist…they would say that we are all gods, the universe is our god, the environment is our god, those types of things.” George Barna
‘Americans are very confused, 7 out of 10 Americans say they are Christians. 50% of Americans say they have a Biblical World View, when in reality only 6% do. 88% of Americans are best described by syncrhrontizm. What it means is they pick and choose ideas from many different philosophies of life. They will buy into a few Marxist ideas, they will buy into a few Post Modern Thoughts, they will buy into some Eastern Mystical ideas about how to live and so forth. They put all those together in a personal blend that becomes their own unique world view. It doesn’t really work when you do that, as often there are contradictions within their own worldview. When you ask them, ‘How do you reconcile those?’ They say, huh, I didn’t know I had those contradictions and secondly, I’m not really worried about it. We’ll see how it works out.” George Barna
“68% of Americans would say they are Christians,” but when you match their actions [fruit] by their beliefs that number trends down. George Barna
“We think we are more religious than we actually are. To us, there are two different things you have to measure, one is beliefs, and one is behavior [fruit]. If your behaviors don’t match your beliefs, then you really don’t believe what you told me you believe. So, when we look at the beliefs, we find that people say they are very spiritual, they are religious, they are active spiritually, but when we look at the behavior we see a downward trend in almost everything that we measure: whether it is church attendance, Bible reading, prayer, worship engagement, confession of sin, talking with other people about their faith…all of those things are on the decline.” George Barna

WHY DO I BELIEVE THE BIBLE?