Prophesy: 2014 The Roller Coaster Year and the Year the Apple Will Bloom 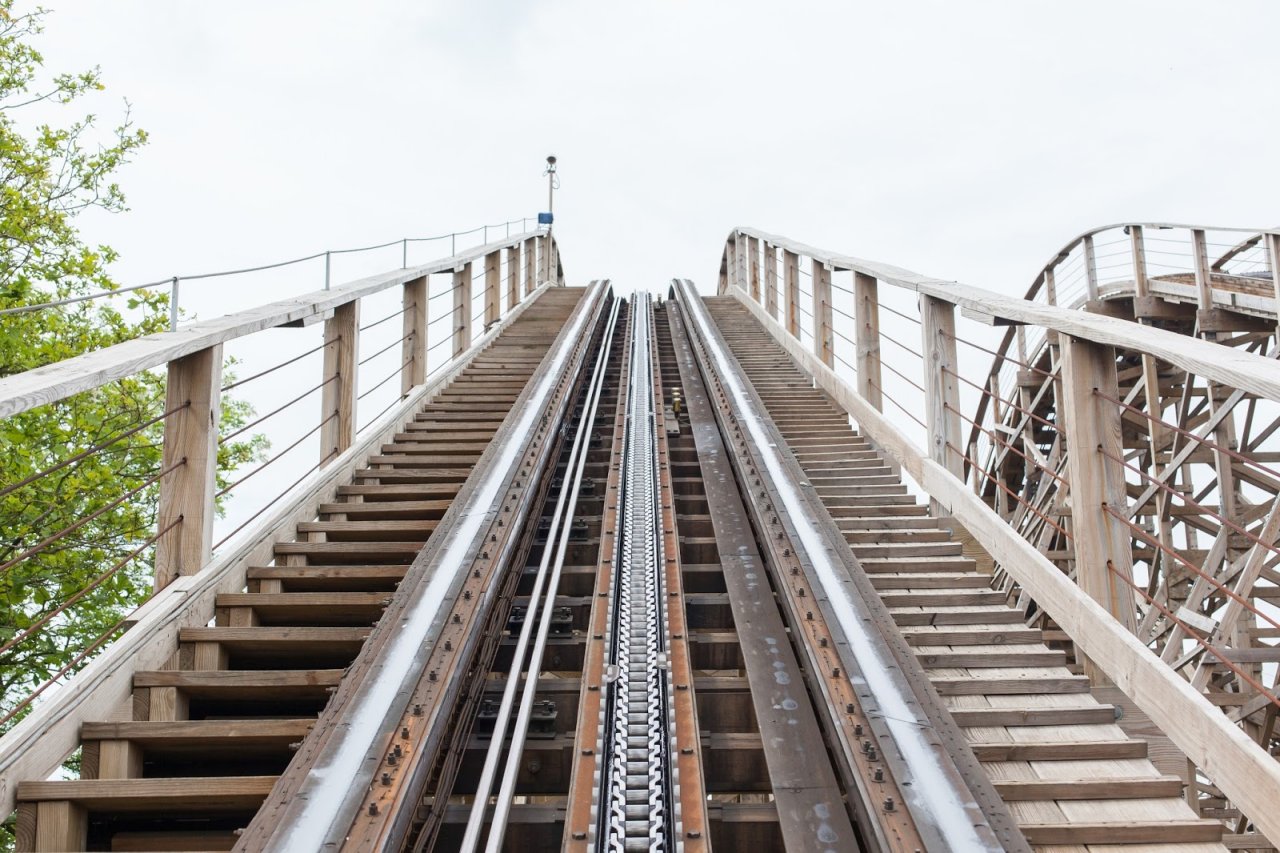 LISTEN NOW! Greg, John, and Pat discuss recent prophetic words shared by Rick Joyner “Vision of a Roller Coaster and Bob Jones regarding “The Coming Promise and Peacemakers Will Fully “Bloom” by Spring.  They continue to share how they see trouble and worry for those who have made money and stuff their God.  However, God is playing taps over the idolatry because it is time for those things to die in the body of Christ at the same time He is playing reveille because He wants to awaken the church to righteousness.  They continue to share Rick Joyner’s word “Prophetic Roller Coaster” and how 2014 will be a year of ups and downs and also Bob Jones prophetic word about how the apples will bloom in the spring.  They continue to share how this will be some of the best of times and the worst of times and the only way to be able to make it is by holding tight to Jesus.
Roller Coaster Vision by Rick Joyner
When I prayed for this coming year, I was shown a roller coaster. This means we will have ups and downs this year. I realize that hardly takes a prophet to predict, but the encouraging thing about this vision was that the ride ended at the highest point. We’re going higher this year! So don’t be discouraged by the dips. Hang on and know that we will be going up again soon.
Our prophetic friend, Bob Jones, told us several months ago that it was going to be a very hard winter. I think this one has already qualified for that. As I am writing this in South Carolina, it is 8 degrees outside. I don’t remember it ever being that cold here. However, the great thing is that spring will certainly follow! The point is that we must hang on during any dips or hard times. They will come to pass, but they will pass! As Winston Churchill once said, “When you’re going through hell, keep going.” Keep going.
The roller coaster I saw was very rickety. It did not seem that it could make it through another turn or the ups and downs. It held together though. I love roller coasters, but this one was not the kind I would get on voluntarily. We don’t have a choice, we are on it. Even the strongest systems of this world are very shaky, and most can only make it through another day because God is holding them together. He is doing this for our sakes, so we should never stop praying for them.
In the vision, there was a platform at the end of this roller coaster ride. It did not look any stronger than the roller coaster, but as we walked across, it became stronger and stronger. On the other side, there was a beautiful, brilliantly glistening train which we boarded. It was the most beautiful and well-appointed train I’ve ever seen. However, as I boarded I saw that when it left the platform, it would enter a long, dark tunnel that I could not see the end of. Even so, the tunnel was going up, and this was a powerful, mountain-climbing train. We’re going up. It may be dark and a bit scary for a while, but we are going higher. That was the end of this vision.
Trains often speak of training in dreams and visions. We may still be on a rickety old roller coaster, but the vehicle that is going to take us to where we must go will be training. This speaks to me of Ephesians 4—the equipping of the saints to do the work of the ministry. Even though it may take a while for us to see where we’re going (the long dark tunnel) we will be going up. This is the vehicle that will get us to where we must go.
It is the nature of the faith walk to not be able to see where you’re going, but you should know what you’re looking for. The one who started the walk of faith, Abraham, did not know where he was going, but he did know what he was looking for—the city that God is building, not men…MORE

The Coming Promise and Peacemakers Will Fully “Bloom” By Spring
By Bob Jones, Jan 7, 2014
Vision of the Apple Tree
While in a time of praise, Bob saw an apple tree in full bloom. As he prayed for understanding the Lord revealed to him that many people have been in the bud. They have been waiting on promises that go back many, many years. Now the Lord is saying that before the apple tree blooms this spring, their buds shall bloom. Although some of them are ancient promises they will bloom in the spring before the apple tree does and they will begin producing the fruit of righteousness.
Peacemakers Bloom
In the fruit of the spirit of prophecy, the apple represents peace. Therefore, this means that a lot of peacemakers shall bloom or come into their divine calling by this spring and they will bring forth the fruit that God has called them to bear. So get ready for the peacemakers to come forth with the fruit of God and reveal the Son of Peace to the world.  The peacemakers that are coming forth in this next season are those who can make peace between the human soul and the Father. As they reveal the Father’s love to the human soul, it will bring stability to the Body in every way. Through the administration of these peacemakers, first and foremost, they will bring man’s soul into the place where it can enter into the peace of God. And this peace is beyond all human understanding. They will also enter into the love of God, which will create the fruit that He wants produced in the Body now. This is literally the beginning of the fruit that’s needed for harvest.
And God’s peace [shall be yours, that tranquil state of a soul assured of its salvation through Christ, and so fearing nothing from God and being content with its earthly lot of whatever sort that is, that peace] which transcends all understanding shall garrison and mount guard over your hearts and minds in Christ Jesus. Philippians 4:7

Peace beyond understanding is what God is offering us. Unfortunately much of the Body has seen the Father from a wrong perspective. They see Him as the cruel master and judge instead of being the God of love and justice. Ninety-five percent of the Body of Christ thinks the Father is the judge that is squashing them all the time. They accuse the Father of bringing calamity and traumatic situations where in fact it is satan.
The Father simply removes His hand where He is no longer welcome. But now we will begin to see Him as He really is; LOVE and love beyond any expectation of love. When we have peace with the Father then the bloom will begin to turn into fruit. And this fruit will begin to come forth this year yielding more next year and even more the following year.
Armory of God’s LOVE

The Lord has opened His armory, and has brought out the weapons of His indignation; for this is the work of the Lord God of hosts in the land of the Chaldeans. Jeremiah 50:25 God is arming the Body of Christ with weapons of His divine love that the enemy has no defense against. We’ll begin to see the army of God come together in unity, a common union, to where the enemy will have to leave entire cities. This army is getting ready to take entire cities and eventually entire states. In certain places in the world, they’ll take entire nations.
This is the year the army of God comes together with angels beyond number and weapons that cannot be defeated by the enemy. Angels are here now preparing the Body for the harvest and there will be a mighty victory. This year, even the blooming of the trees is something that satan can’t stop from happening.

You shall also decide and decree a thing, and it shall be established for you; and the light [of God’s

favor] shall shine upon your ways.  This is what I see; the blooming of the apple tree will be our blooming in the spirit and worshipping the Father in spirit and in truth. It’s our human soul making peace by the knowledge of the Truth. It’s bringing the soul in submission to the spirit and allowing the spirit man to be in control of our conscience (actions, deeds and thoughts). Then the Body will understand the Father’s divine nature – love. He loves you! Scripture plainly shows that God loves us; it’s His nature because He is LOVE (1 John 4:8). The peacemakers’ entire nature will be characterized by His love and love will be the fruit they bear.

Now come the peacemakers and they make peace with God and with man. They show the Father’s nature, LOVE! The love of the Father is all authority to His sons and daughters. I don’t know how fast the fruit is going to mature after they bloom. But I do know that by the middle of May the blooms will be over and the fruit will begin. And from what I see, this fall will be awesome.
Bob and Bonnie Jones
The Prophetic Ministry of Bob and Bonnie Jones
Website: bobjones.org
Shutterstock.com/MyImages- Micha

700 Club’s Pat Robertson’s Word for 2014: Greatest Year for the Church