”Israel Prepares for War!” says Pat Robertson; 1 Million Israelis Run for Bomb Shelters
Greg, Pat, and Steve share about the perilous realities that are happening in Israel at this moment. Continuous rockets are being fired from the Gaza Strip into Southern Israel causing 1 million Israelis to flee to be placed in bomb shelters for safety. In Israel, even the bus stops have been constructed as bomb shelters. There are sirens throughout the region that sound when an incoming rocket is launched into Israel signaling the 15 seconds needed to get to a bomb shelter. The Israeli Defense Force (IDF) shares that the fastest man in the world runs 200m in 20 seconds highlighting the reality that even he wouldn’t make the 15 second window of safety.  If these travesties can happen in Israel they can surely happen in America. We must pray for Israel and respond. In this electrifying moment, they share these realities of what daily life is like for Israelis helping you us to develop empathy for the people of Israel, and so much more. Also shared in this segment: persecution, Jesus and the Jews, hardship, terrorism, murders, Benjamin Netanyahu, Trembling Cup, War, missiles, and prayer.
Costco Pulls America off their Shelves
Greg, Pat and Steve talk about the recent decision of the Retailer, Costco, to remove the book, America: Imagine A World Without Her by Dinesh D’Souza, from their shelves. Why would a book about the history of America be pulled from a store in the nation that it is written about? It is situations like this that highlight the importance for us to pay attention. This book was made into a movie that was recently released. Be encouraged as they share the uplifting truths of how the movie unbiasedly recounts the history that made up the nation of America, and so much more. Also shared in this segment: values, Original Intent of America, Constitution, history, narratives, and truth.
“Persecuted”: The Movie
Greg, Pat and Steve share about the upcoming release, coming out July 18, of the new movie: “Persecuted”. This movie recounts the events of a man that refuses to compromise his faith in Jesus Christ for the legislation of the world. As the church, it is an exact reminder that Jesus said we would be treated the same way He was treated when we stand for Him and live a life for Him. Be encouraged and allow your faith to be stirred, and so much more. Also shared in this segment: persecution, accusations, newspapers, lies, and the press. 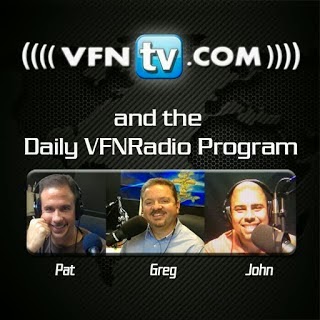 Bank Teller Fired for saying “Bless You”- she says in Fox News Interview
Greg, Pat, and Steve share about the events of a woman who was reportedly fired for saying “Bless You” while working at a bank. It is time to stand where God has placed us and be a light for Him. Be encouraged as they share the details, and so much more.  Also shared in this segment: faith, boldness, two masters, and witnessing.