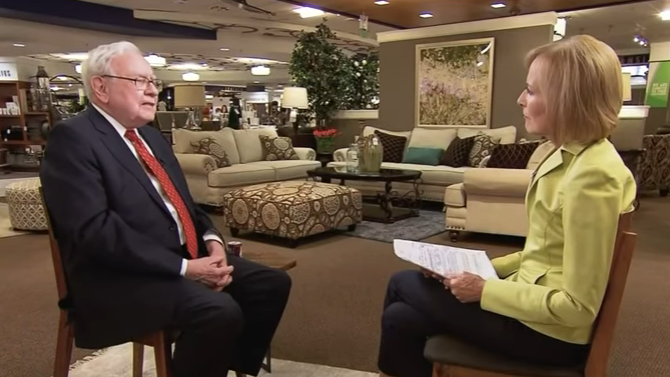 LISTEN NOW! (Or WATCH FULL PROGRAM!) 2017 is going to be a BREAKTHROUGH YEAR!! We are seeing sweeping changes taking place in Washington as well as effects rippling through America’s economy. When seeking to find out how America’s economy is responding, who better to ask than the #2 richest man in America, Warren Buffet. He recently sat down with PBS News Hour to discuss the realities of America’s economy and unemployment.

When PBS’s Judy Woodruff sat down with Buffet, she highlighted the highs in America; the Stock Market, and low unemployment, but commenting on the lagging growth of our economy. “…we’re still not seeing the growth that people would like to see. What’s going on?” Unshaken by the present realities of the economy’s growth, Buffet speaks with profound wisdom. “The economy is doing well, but all Americans aren’t doing well.”

While President Trump has commented on his desire to increase the present population growth of 2%, Warren Buffet shares his take on a higher growth than 2%. “I don’t think probably on average we will have that kind of growth.” As Buffet continues to share, 2% provides more for our economy than most would assume. “If you take 2 percent, we have a half-a-percent population growth, and we have a little immigration, but 2 percent in one generation will add $19,000 of GDP per person, family of four, $76,000 in one generation. So, your children and your children’s children and all that, they will live far, far, far better than we live with 2 percent growth.”

As Woodruff turns the conversation towards the unemployment rate she comments, “More people are leaving jobs than are joining. Are we seeing some kind of shift?” Buffet shares how different America’s reality of production is compared to 200 years ago. If you think about it, if you go back to 1800, it took 80 percent of the labor force to produce enough food for the country. Now it takes less than 3 percent.”

Woodruff continues the conversation by asking about interest rates. “I think you said earlier this year that you weren’t worried that the market was in a bubble, because interest rates were staying low. As you know, the Federal Reserve is starting to raise them. Do you still feel the market is not in a bubble?” Buffet comments on his extensive experience in stocks from his first stock purchase in 1942 to today. “And no matter what the headlines say, or terrible things are happening — we were losing the war in the Pacific when I first bought stocks. So, America’s going to do fine over time. America business is going to do fine over time.”

When critics comment on the economy of America, we can listen to what Buffet is saying to get an understanding of what is happening. Taking into consideration his accurate predictions and market decisions, Woodruff asks Buffet what is the take away is for those wanting to invest in America. “Today, as people look at you and look at the decisions that you have made, what mainly should people take a look at?” Buffet shares these encouraging words, “They should be willing to bet on America. They shouldn’t listen to a lot of jabbering about what the market’s going to do tomorrow or next week or next month, because nobody knows. They should just keep buying and buying and buying a little bit of America as they go along. And 30 or 40 years from now, they will have a lot of money.” These are such important truths to understand. We are blessed to be a blessing. We must learn how to manage millions in order to invest millions in the Kingdom.

Those Saved in the Last 100 Years Can Be Traced Back...

IT WAS LIKE AN EXPLOSION! The Jesus Revolution! Part 7