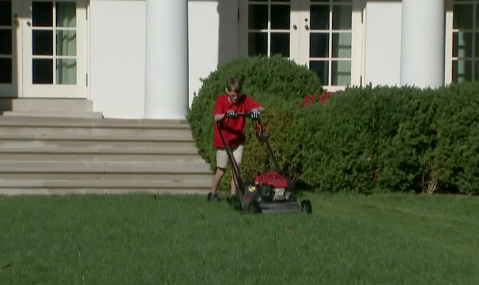 LISTEN NOW! (Or WATCH FULL PROGRAM!) It is so deeply encouraging to see a young generation that understands the value of hard work. This couldn’t be better embodied than in the recent actions of an 11-year-old boy: Frank. Frank recently wrote a letter to the President stating that he wanted to cut the White House lawn and that he was willing to do it for free. Considering that every letter sent to the President is read by staff members, White House Press Secretary Sarah Huckabee Sanders took time in a recent Press Meeting to bring attention to Frank, and his letter to the President.

Dear Mr. President: It would be my honor to mow the White house lawn some weekend for you. Even though I’m only ten, I would like to show the nation what young people like me are ready for. Frank continued to entail the different options he has available as he has started his own business. As Sanders describes Frank, he “embodies the enterprising and ambitious spirit of America”. While Frank caught the attention of the Press Secretary, he also got the attention of Fox News.

When Frank was asked about his time cutting the lawn of the Rose Garden, the Fox News anchors also commented on Frank’s steadfastness to keep cutting even while President Trump walked up to encourage Frank. He was a man of few words when the interviewers continued to ask him if he thinks his business would grow because of this. “Yeah it should.”