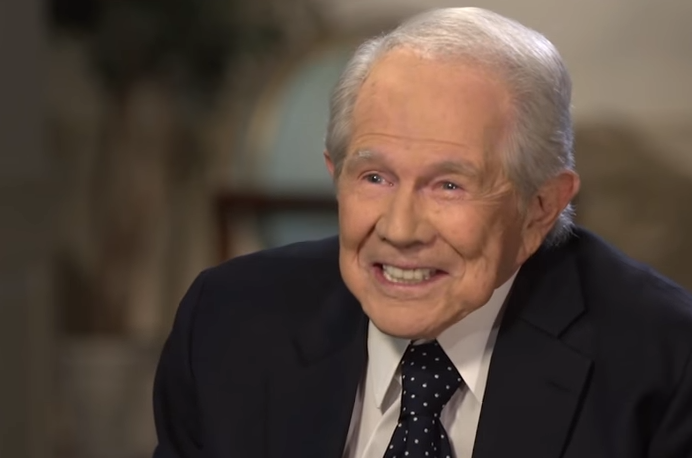 Prayers were being immediately lifted up throughout the nation, and possibly throughout the world as word spread that Founder of CBN News, Pat Robertson, had suffered a stroke caused by a clot in his blood stream. As CBN News has reported, Pat Robertson suffered an embolic stroke. Through a sequence of divine encounters, family members were able to arrive the moment he began to show signs of a stroke, and the family knew which way NOT to go to avoid being stopped at the train tracks.
Shortly after an hour of receiving symptoms of a stroke, Robertson received a drug that dissolves the clot that has formed in the blood. The drug is called tPA. Moments after receiving the drug, Robertson was praising the Lord with lifted hands. As the Robinson family joyfully shares with the world, “Dr. Robertson is alert, awake and expected to make a full recovery. He was discharged from the hospital and is now at home recovering”.
The powerful reality of this miracle is that is serves as a confirmation to a word of knowledge that was recently shared by Pastor John Kilpatrick less than a month ago. Pastor Kilpatrick titled it “Grave Robber”. Pastor Kilpatrick shares what the Lord revealed to him. “In 2018, the Lord said I am going to interrupt premature death…I will return sons to their mothers again…daughters will be returned from death’s sleep, such as comas and life support to those believing for a miracle.”
PRAISE GOD! HALLELUJAH! This is such a mighty testimony of the power of God. Read more about what the recent status is about Pat Robertson, and the full word o knowledge from Pastor John Kilpatrick.
screen capture from youtube.com/CBN News
Related Content
Pat Robertson To Make Full Recovery After Embolic Stroke
Wonder Drug Used to Save Pat Robertson Must Be Given Soon After Stroke Symptoms Begin
Am I Having a Stroke? Here Are the Symptoms and What You Should Do
Pastor John Kilpatrick’s Word of Knowledge: Grave Robber
Prophetic Words for 2018 and Beyond
Related Articles
PROPHECY! 2018 YEAR OF PARADOX; GRAVE ROBBER; and TIME CHANGE – John Kilpatrick
miraclesPat Robertsonrecoverystroketestimony
0
FacebookTwitterPinterestEmail