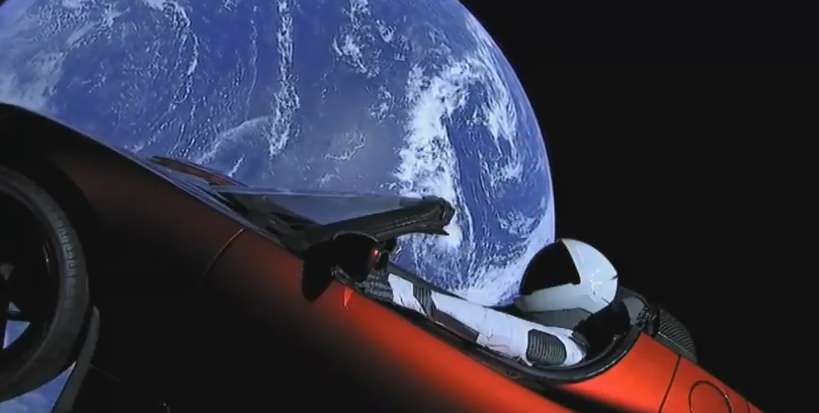 LISTEN NOW! Or WATCH FULL PROGRAM! In the 1960’s, America was part of the space race to be the first to land a man on the moon. The budget for this endeavor was unprecedented. When governments were reaching for new achievements in space, we are now witnessing companies achieving new accolades. Elon Musk and SpaceX have recently launched one of the largest rockets into space. Musk has the desire to one day colonize Mars.
The rocket that Musk used was SpaceX’s “Falcon Heavy Rocket”. According to Tech Insider, ‘It has 27 engines and can generate more power than eighteen 747 jumbo jets.’ To give us a comparison, the Falcon Heavy Rocket “is the most powerful rocket to fly since NASA’s moon rocket, the Saturn V”. If this were not interesting enough, Musk added his own personal flair to this event by customizing the payload that would be added to this massive rocket.
Musk launched his own Tesla Roadster into space. Musk posted this on his Twitter account, “Payload will be my midnight cherry Tesla Roadster playing Space Oddity. Destination is Mars orbit. Will be in deep space for a billion years or so if it doesn’t blow up on ascent.”
This is a remarkable moment. It is amazing what is taking place in our generation. Companies are now doing what entire nations were doing a few decades ago. What are your thoughts about what we can achieve? What are you dreaming of achieving? See the full details of what is happening, and so much more. Also shared in this segment: Tesla, SpaceX, Elon Musk, science, technology, NASA Space Center, Rocket Launch, battery-operated cars, Mars orbit, and Outer Space. Greg and John shared in this segment.
screen capture from youtube.com/American News
Related Content
Watch SpaceX Launch A Tesla Roadster To Mars On The Falcon Heavy Rocket — And Why It Matters
LIVE: Starman Driving in Space after Successful Heavy Falcon Launch SpaceX Real-time Updates Elon Musk SpaceX iAbide.org
Emmaus Road Discipleship
VFN Kingdom Business
Subscribe to our YouTube Channel
Follow us on Twitter
Partner with VFNKB
Related Articles
We are going to Mars!President Trump Signs New $19.5 Billion NASA Bill; and Elon Musk’s Vision to Colonize Mars?
Driverless Cars will bring Worldwide disturbance, says Elon Musk
“One in a Billion Chance” We are Really Here or are We part of Virtual Reality? Adults are actually having this conversation
battery-operated carsElon MuskMars orbitNASA Space CenterRocket LaunchscienceSpaceXtechnologyTesla
0
FacebookTwitterPinterestEmail