LISTEN NOW! Greg, Pat and John share Fox News from Bill O’Reilly and recent breakdown of the happenings in America as well as what is occurring across the globe. Bill O’Reilly shares an extensive list that causes growing concern:

-Apparently, the Russians have violated the 1987 missile treaty by testing a new type of cruise missile
-Putin continues to attack Ukraine as military units inside Russia are firing rockets into that besieged country.
-Russian- backed separatists continue to block the investigation of the Malaysian jet that was shot down
-Putin now says he’ll restore relations with Cuba
-Today, President Obama imposed new sanctions on Russia
-President Obama also said Europe will impose more sanctions
-Fighting between Hamas & Israel, 100’s are dead, and America is powerless to stop the carnage
-Palestinians are being held captive by Hamas, and once again America can’t do anything about it
-In Iran, the negotiations over nuclear weapons continue because the U.S. has released nearly $3 billion in frozen assets.
-In Iraq, intelligence reports say the ISIS army is poised to attack Baghdad.
-Christians in Iraq are being terrorized and murdered.
-President Obama has taken no overt action against ISIS.
-In Afghanistan there are reports that the Obama administration cannot account for 750,000 weapons given to Afghan forces.
-Reports say the Taliban is making military gains throughout Afghanistan.
-In Libya, the USA has closed its embassy in Tripoli and evacuated personnel because security is so terrible there.
-In Colorado, Lt. Gen. Michael Flynn, the director of Defense Intelligence Agency, says terrorist ideology is growing fast
-On our southern border, the chaos continues as U.S. authorities cannot stop the flow of illegal aliens into this country.
-On just about every front, there is danger to the people.
Now is not the time to bury our heads in entertainment or social media. Instead of looking down, or turning a blind eye, we can turn our hope heavenward and remember that Jesus spoke about these very happenings:
Jesus answered: “Watch out that no one deceives you.  For many will come in my name, claiming, ‘I am the Messiah,’ and will deceive many.  You will hear of wars and rumors of wars, but see to it that you are not alarmed. Such things must happen, but the end is still to come.  Nation will rise against nation, and kingdom against kingdom. There will be famines and earthquakes in various places. All these are the beginning of birth pains.         -Matthew 24:4-8
The time that a mother endures during the birthing of a baby is difficult. But, the joy that comes from the beauty of a new baby is greater. We are surely amidst difficult days, and greater are the days of difficulty ahead of us. But, Jesus has overcome this life. These hardships and difficulties simply point to a greater happening: the return of Jesus. Amidst great calamities and travesties happening in the world, be encouraged as you are reminded what they represent, and so much more. Also shared in this segment: wars, ISIS, Benghazi, Bill O’Reilly, terrorism, persecution, President Obama, Mexico Texas Border, Iraq, Afghanistan, Vladimir Putin, Fidel Castro, and Iran.             WATCH FULL PROGRAM! 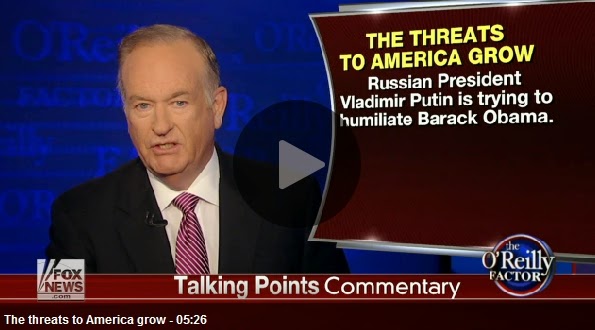 The threats to America grow
Attack on Pearl Harbor
iAbide.org
Voyage of the St. Louis

Signs of the End Times

Related Articles
Russian Planes Taunting American Warship
Forbes says Putin Most Powerful Leader over Obama
G20 Summit America Comes in Last?
President Obama in Russia for G20 Summit as War Looms
Is Russia Using the Olympics to Set the Stage?
Malaysian Airline Reportedly Shot down over Ukraine, No Survivors: Are Russian Rebels behind this?
Ukrainians STAND UP for Freedom: God Answers Prayers
Gog and Magog (i.e. RUSSIA!) Is Gathering Up the Nations?
Israelis Using their Cell Phones as Tool To Protect Themselves: New Red Alert Israel App Warns of incoming Rockets- DOWNLOAD Today
Prophetic Fulfillment? “The Bear Awakens” Israel, Russia, Oil, Ukraine, Jerusalem, Radical Islam and Mecca
Organizer of the Day vs Organizers of the Night: Are They Using Tips from lucifer to Organize America and the World
VISION: Children of the Day OR Children of the Night?
7 Signs of the End of Times and The Second Coming of Jesus?
C1R2I3S4I5S6    F1A2I3T4H5

Are Nations Coordinating an Organized Nuclear Attack Against America?