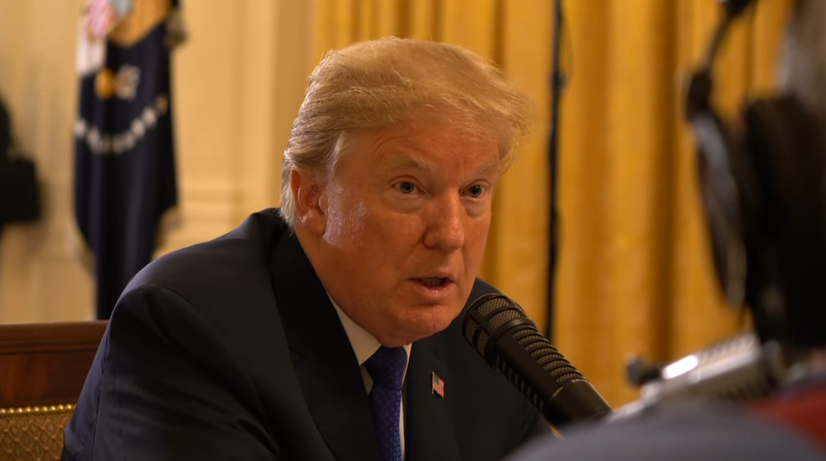 LISTEN NOW! Or WATCH FULL PROGRAM!
Many people have questions about how our government is run and how activities are carried out, even after a new administration is voted into office. President Trump recently sat down with syndicated Talk Show hosts, ‘Rick and Bubba’, and carried out a very personal conversation in the East Wing of the White House.
After presenting a myriad of questions to the President about recent developments in the White House, Rick makes a statement about how people expect their vote to impact government. “There’s a little bit of frustration cause I think there’s people that said, ‘we voted for this administration, and we want their vision for America to be implemented’.” He brings up a point that some in Congress may not even understand. As the President responds, he highlights how the American people are going to get what they voted for.
“We are going to get Repeal and Replace…Obamacare is exploding and imploding just as I said it would.” The President continues to share his perspective on the tax cuts. “The tax cuts are gonna be very important…But, I will say the receptivity, and you people know as well as I do, that the receptivity has been fantastic for the tax cuts.”
It is so beautiful to see the President allowing such down-home questions to be asked. To see our President sitting down and taking the time to talk with media openly and honestly about these issues is deeply encouraging. This reality is another confirmation of the prophetic vision the Lord gave to Greg Lancaster before Donald Trump was elected as President. In the vision, Greg met with Donald Trump in the White House, shook hands with him as Donald Trump had just won the Presidency, and immediately the American people were being invited into the White House.
What we are seeing happen in America is not the action of any government. This is being done by the hand of God. We are benefitting from the mercies of God. What do you think about our President bringing in local media to ask any question they want? See the full conversation about the President’s discussion with Rick and Bubba, and so much more. Also shared in this segment: media, radio, television, honesty, Rick and Bubba Radio Show, the people’s house, The White House, and President Donald Trump.
screen capture from youtube.com/Rick & Bubba
Related Content
Rick & Bubba Interview with President Donald Trump
Rick & Bubba Radio Show
iAbide.org
Emmaus Road Discipleship
VFN Kingdom Business
Subscribe to our YouTube Channel
Follow us on Twitter
Partner with VFNKB
Related Articles
Pray for our President of the U.S.A., President Donald Trump
Americans Are Dreamers Too; President Trump’s Vision For America, State Of The Union Address
173 ACCOMPLISHMENTS IN 353 DAYS! Looking Back On The First Year Of The Trump Administration
honestymediaPresident Donald TrumpradioRick and Bubba Radio Showtelevisionthe people’s houseThe White House
0
FacebookTwitterPinterestEmail