Home Civil Rights & Civil Christianity in America The Urgency of Now! We are on the precipice of Great Calamity lest we Learn from the Trials of those who have gone before us: Dietrich Bonhoeffer, Germany, Christians, Jews and Hitler Part 1
Civil Rights & Civil Christianity in AmericaCrisisGovernment MountainProphecyProphetic Words from Oct 2016 and OlderRadical IslamRadical Islam in the WorldReligion Mountain

The Urgency of Now! We are on the precipice of Great Calamity lest we Learn from the Trials of those who have gone before us: Dietrich Bonhoeffer, Germany, Christians, Jews and Hitler Part 1

The Urgency of Now! We are on the precipice of Great Calamity lest we Learn from the Trials of those who have gone before us: Dietrich Bonhoeffer, Germany, Christians, Jews and Hitler Part 1
When catastrophic events are known to be on the horizon, some people respond with a survival plan of consuming themselves with the ‘sleeping pills’ of the day; in hopes of being able to wake up when it’s all over.  With that mindset, one can be enjoying the choicest of entertainment and the finest of foods only to wake up into the reality of concentration camps and evil. During the 1940’s, in Germany, an evil dictatorship was on the verge of being established and placed in power. The people had no idea what would transpire in the months ahead. Today, we have the ability of looking back into this history of what took place in Germany, and seeing the events that occurred months prior to the beginning leadership of Adolf Hitler, that ultimately resulted in 6 million Jews being murdered.

In the book, Bonhoeffer: Pastor, Martyr, Prophet, Spy, author Eric Metaxas brings together a marvelous tapestry of events and documents to tell the story of Dietrich Bonhoeffer’s life. Bonhoeffer lived in a critical hour of the church, just moments before Adolf Hitler’s rise to power in Germany through the Third Reich. Confusion was among the people and division was across the land. As a Christian man who sought to sound the horn of warning to the people in Germany, Bonhoeffer said this about those events, “There were so many theological and political points of view in the opposition that they could never muster a single, focused plan of resistance.”  It had seemed that everything that could be divided was divided.

At this time, Germany was being introduced to a democracy. If only there could be an elected leader to bring peace in such catastrophic times. Adolf Hitler was the man the people voted for; and the one chosen to rectify the situation. Hitler wanted to change the religious beliefs of a people. He successfully divided a people against the Jews. The church of the day sought to merge with the government in hopes of being able to influence the decisions being made. Bonhoeffer witnessed these events and resolved to be a voice of warning, as loud as he could. The ears of the people did not listen.
With division taking place in America on every topic and morality that can be imagined: the Constitution, law enforcement, education, marriage, and family, we are seeing the same division taking place. In regards to the results of division, Jesus said this in Luke 11:17 “Any kingdom divided against itself will be ruined, and a house divided against itself will fall.” If a man or woman is continually divided against their spouse, if children are divided against their parents, if parents are divided against the teachers of education, if a society is divided against the law enforcement, if a nation is divided against its original founding documents, why should one be surprised that it falls? When those desiring to be voted into power of a leadership openly declare, “The deep-seeded religious beliefs of culture need to be changed…” we need to be alerted to the clarion call ringing out from the Bonhoeffer voice of our generation. There is no greater statement to describe the current days that we are living in and experiencing than these: “The Urgency of Now!” Hear more of the story of the events that took place in Germany, the actions that Bonhoeffer made, how the people reacted, what ultimately transpired in a 1940s Germany, how applicable these events and truths are to the events we are seeing today, and so much more. Also shared in this segment: Democracy, persecution, Israel, the Jews, Adolf Hitler, Woodrow Wilson, propaganda, Hillary Clinton, Saul Alinsky, Joseph Goebbels, Al Sharpton, Supreme Court, Mein Kampf, the Holocaust, Cloward and Piven, Yemen, Libya, Baltimore, humility, warnings, and wisdom. Greg and John shared in this segment.
Courtesy of Therina Groenewald/Shutterstock.com 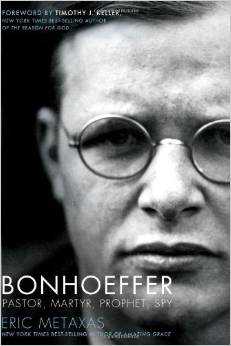