Home GLM God allowed it: Why be Offended?
GLM

God allowed it: Why be Offended?

LISTEN NOW! Steve, John and Pat continue to share from John Bevere’s book, The Bait of Satan.  They discuss how Joseph in the Bible experienced so many offenses and attacks and how he was able through God’s grace not to allow them to derail God’s plans for his life.  John Bevere, in his book, Bait of Satan says, “Let’s see how Joseph would fare in our churches today.  If he were like most of us, do you know what he would be doing?  Plotting, Revenge.    He would comfort himself with such thoughts as, “when I get my hands on them. I’ll kill them!   I will kill them for what they have done to me.  They are going to pay for this.”  However, thankfully this was not Joseph’s response.  We can learn than when we are offended by others that God actually allowed it to happen. He could have stopped it.  Instead of catching offense begin to ask God what is his plan, what is he trying to tell or show you?  Ultimately God is the one who is in control of all things, who are we to be offended by what He and who He will use in the formation of our character? 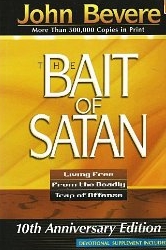