Stand for what you BELIEVE: Speech by Congressman Trey Gowdy at Liberty University 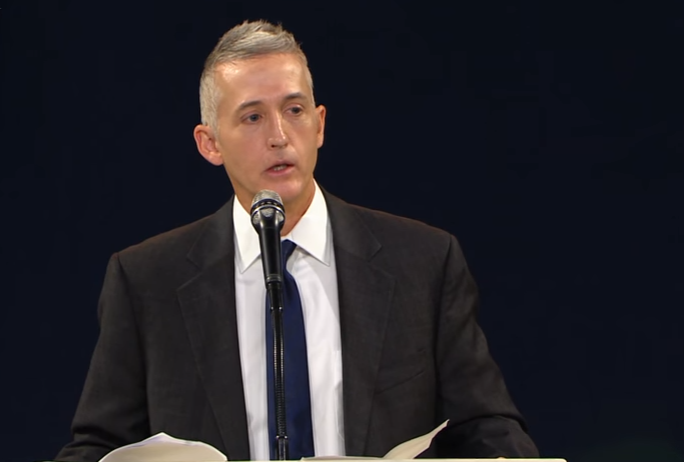 LISTEN NOW! (or WATCH FULL PROGRAM!) Trey Gowdy has garnered quite the reputation as an outspoken Congressman with values and morals as he speaks out for the many issues that are foundations in our nation. Congressman Gowdy continually shared these words of values and morals when he spoke to a packed auditorium at Liberty University.

As he addressed all of those in attendance, he comments that some may believe that our country is headed in the wrong direction. With this in mind, he points to an interesting moment in history: The Melia Dialogue. It was a dialogue between two people, the Melos and the Athenians. On the verge of war, the Athenians comprised an army that dwarfed the Melians. The Melians refused to cower down and maintained their resolute efforts to wage war against the Athenians; all the way to their entire destruction. With this in mind, Congressman Gowdy asks this revealing question: “What do you believe in enough that you would march forward even if you knew that you were marching forward to a certain defeat?” Additionally, he asks this series of follow up questioning; “Which do you value more; truth or freedom? Unity or diversity?”

Congressman Gowdy refers to his extensive experience in politics and the many dialogues and conversations that he has had with others, never once resorting to attempting to convince another that something was wrong. “Do you believe in the respect for the rule of law?” As he points out, it is this rule of law that levels the playing field for every citizen of America. No matter the income or economic status, everyone should abide by the speed limit, regardless of who you are. “What do we believe? And why do we believe the things that we do?” If we as the Church are going to have an effective witness to others, we must know why we hold the convictions in our hearts that we do. But, as Congressman Gowdy continues, having beliefs isn’t enough. We must be able to communicate.

“If you can’t communicate what you believe, you’re not going to be very successful. So, you need a message, and that message better be “Why,” why you believe, what you believe. But you also need a very effective manner or method of communication.” As he continues to share from his life experiences, anytime we seek to communicate with others who may not share our beliefs, one method that we should never attempt to use, is insult. “Insulting people does not work if your goal is to persuade”. But, what does work is the ability to establish and maintain a relationship with another human being. “The person has to know that you care about them.”

Congressman Gowdy continues to share about those in his close circle that has had a great impact on his life; Senator Marco Rubio, and Senator Tim Scott. Now, granted these may be names that some recognize or others may not. In our own states and neighborhoods are streets of well-known names, maybe airports named after historic figures in our nation’s history. But, as Congressman Gowdy points out, we can live influential lives, not by attempting to live like those who are remembered on street signs throughout America, but in a way, that influences those to our left and right. Congressman Gowdy shares these encouraging words, “If you are waiting around for another Ronald Reagan, or another Martin Luther King Jr., or another Abraham Lincoln, you are going to have a long, miserable wait. It’s not going to happen. If you’re waiting on a knight or knightess to ride in on a white horse and change whatever you think ails our country or your school or your community or your family, it’s not going to happen.” With these words in mind, Congressman Gowdy shares the words that empower every American to live a life that will bring change. “I’m not asking you to be Reagan. I’m not asking you to be Lincoln. I’m just asking you to live a quiet life of conviction and virtue and actually live out what you profess to believe, and if you can do that, you’ll be a leader, you’ll be persuasive, and your generation will get this country headed back in the direction that you want it to be in.”

What about you? What do you believe in? Do you choose truth or freedom? Unity or Diversity? Do we live in a way that lives out the convictions that we believe in or just say that we do, exercising hypocrisy instead of authenticity? America is not a perfect land, nor are the people within it perfect, but we do have the freedoms that allow us to live out our daily lives in accordance to the values and beliefs that we hold near and true in our hearts. In our homes, we should each have a Bible, The Declaration of Independence, and The Constitution, because this is what we are ultimately fighting for in America. Be encouraged as you see the entire speech from Congressman Gowdy, how we can live out a life of inspiration and action, and so much more. Also, shared in this segment: education, Liberty University, Dinesh D’Souza, persuasion, hypocrisy, The Potomac River, drowning, rope ladder, Congressman Trey Gowdy Jefferson, marriage, the rule of law, conviction, and surrender. Greg and John shared in this segment.
screen capture from youtube.com/Liberty University

Related Content
Trey Gowdy – Liberty University Convocation
Congressman Trey Gowdy
Athens and Melos
Senator Marco Rubio
Senator Tim Scott
iAbide.org
Emmaus Road Discipleship
MeetMyFather.org
Partner Now with VFNtv
VFNKB.org
Related Articles
Pray for our President of the U.S.A., President Donald Trump
Jesus and the Great Expectation; Then they WENT OUT
Only 4% of Millennials Have a Biblical World View?
“America At the Crossroads”; George Barna’s Book Reveals the State of the Church
Having a Biblical World View – Do You Have a Vertical View, or Horizontal View of ALL THIS STUFF!
Compared to X & Y Generation, Is the Z-Generation reportedly “Less Engaged” in the Things of God?
Re-Thinking Church – We Made it Up
Is It Time to Rethink Church?
#VFNtv    M1O2U3N4T5    G1O2V3E4R5N6    E1D2U3C4A5T6E7    R1E2L3I4G5I6O7N8