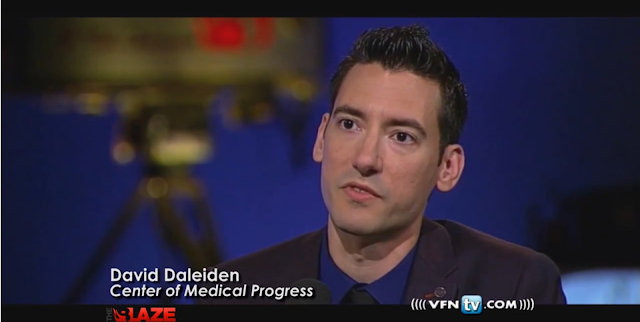 We will be hearing from David Daleiden today, the president of The Center of Medical Progress. We learned that over 300 hours of investigative video was captured to uncover the selling of baby body parts through Planned Parenthood. The team that has comprised this footage and walked out this journey is made up of 5-10 people. With a budget of around $120,000, David describes it as a “shoe-string budget.” In this segment we are watching David being interviewed by Glenn Beck, with The Blaze. In humility, David states that he has been trying to stay out of the spotlight so that the actual story about the selling of baby body parts, “like car parts,” stays first and foremost. In the 300 hours of footage, only 20 hours has been released which, according to CMP’s website, seven videos total were released.

David continues the conversation and expresses his concern as he put himself in this dangerous position, by undercover investigating, which took a total of 2 ½ years to gather all the footage. He explains a time he had a fearful encounter with a late-term abortion doctor, Dr. Shelley Sella. He said as he was talking to her, as he was undercover, all of a sudden, in the middle of a conversation, a hardness and aggressiveness shined in her eyes. He instantly felt the fight or flight instinct because he felt exposed like she knew who he was and then just like that Dr. Sella went back to acting and talking as she was before. After research David says that look is known as the predator look that people get when they murder people, and this doctor aborted babies up to 40 weeks!

David talks about how hard it was to be undercover and meet with many abortion doctors, but now that he has exposed Planned Parenthood and come out with this information, he says that he has had more positive responses than negative. In the public’s response, he has been encouraged by many people who are doing protest and prayer vigils to stop the harvesting of baby parts. Also, when it comes to public servants, a few people in Congress are now investigating Planned Parenthood because of the release of these videos. “I always thought that these videos and the revelations about Planned Parenthood’s baby parts harvesting would be big news, but I never thought or anticipated or expected that ‘10 presidential candidates commenting about it in the first 24 hours’ big.”

David was 23 years old at the time he did this investigation, and with that, it should inspire believers of all ages to stand up for what is right in God’s eyes. We can all do our part to help with stopping the selling of baby parts and the ending of abortion. As the Church, we need to keep praying for abortion to end! See the full interview on this discussion and much more. We want to hear from you and what your thoughts are on this topic. Also shared in this segment: Glenn Beck, The Blaze, After Tiller Documentary, Oklahoma, Center for Medical Progress, Human Capital, Nancy Pelosi, Pope Francis, Stem Express, Southwestern Women’s Options, ISIS, security, investigative journalism, and VFNInternship. Greg shared in this segment.