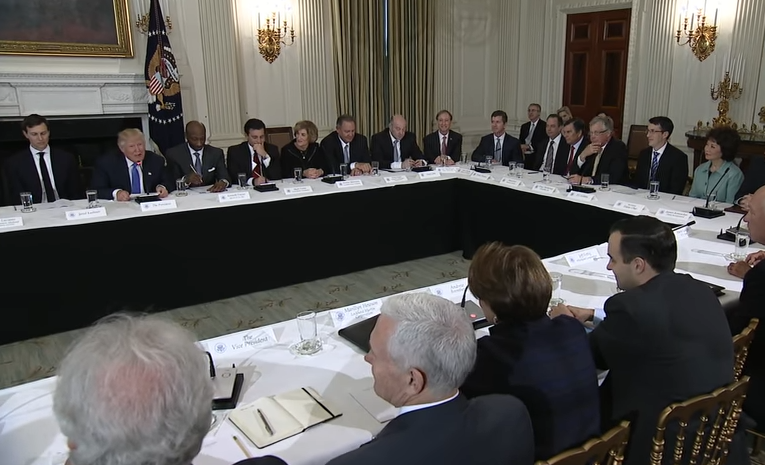 LISTEN NOW! WATCH FULL PROGRAM! From the times of campaign visits all across America, to the White House, President Trump has continually address how important it is to create new jobs in America and make changes that will benefit companies in our nation. In a recent listening session with American Manufacturing CEOs, The President focused on creating strategy to create new jobs in America. Some have expressed surprise at the action that President Trump has taken since taking Office. “In fact, people are saying they’ve never seen so much happen in 30 days of a presidency” says President Trump. His actions are just. America has greatly needed a change in the area of business. During this session, President Trump describes just how badly American businesses have been impacted. “As you know, the United States lost one-third of our manufacturing jobs since NAFTA.” He also points out, “And 70,000 factories closed since China joined the WTO.” Now is the time for change.

The list of those Manufacturing CEO’s in attendance couldn’t be any more stellar. With more than 20 different CEO’s attending, President Trump describes the vast depth and wealth represented in the room.  “They represent…nearly $1 trillion of sales and 2 million employees, large majorities of which are in the United States.” Companies such as 3M, Caterpillar, Whirlpool, Carrier, Merck, Dow Chemical Company, Locchead Martin, and Johnson & Johnson are just a few of those who attended this important meeting.

This gathering wasn’t simply an opportunity for media cameras to gather, or to simply discuss the need for jobs to be created in America, but a gathering of leadership to create strategy for job creation. Moments later, a handful of these leaders were standing behind President Trump in the Oval Office as he put pen to paper and signed an Executive Order that would not only benefit American workers, but also American companies and corporations. The President additionally describes what is presently happening to American companies. “Excessive regulation is killing jobs, driving companies out of our country like never before.” The President also explains how this Executive Order will benefit the American worker. “…this executive order directs each agency to establish a regulatory reform task force, which will ensure that every agency has a team of dedicated — and a real team of dedicated people to research all regulations that are unnecessary, burdensome and harmful to the economy, and therefore harmful to the creation of jobs and business.” The President continues, “Each task force will make recommendations to repeal or simplify existing regulations. The regulatory burden is for the people behind me and for the great companies of this country, and for small companies — an impossible situation, we’re going to solve it very quickly.”

It is so exciting to see how the many words that were expressed and promised during the campaign trail were not just talk, but promises that we are witnessing being put to action. Allow your hope to rise and your optimism for the future to be stirred and lifted up as you see the great unity and collaboration taking place in the White House, and so much more. Also shared in this segment: trade deficits, product, negotiation, and borders. Greg and Steve shared in this segment.
screen capture from youtube.com/The White House